EY Entrepreneur of the Year: 24 firms shortlisted for award 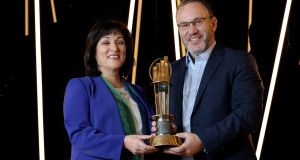 Pictured at the announcement of this year’s finalists are Kevin McLoughlin, EY partner lead for the awards programme, and Anne Heraty, chief executive of Cpl Resources and chair of the judging panel

The shortlist for the 2019 EY Entrepreneur of the Year awards has been announced with Supermac’s founder Pat McDonagh and Matt Ryan of hospitality group Press Up Entertainment among the 24 finalists selected to compete across three categories.

This year’s finalists have been selected from more than 120 nominations by a judging panel chaired by 2006 EY Entrepreneur of the Year Anne Heraty, who is chief executive of Cpl Resources.

Now in its 22nd year, the EY Entrepreneur of the Year awards programme works to recognise, promote and build a supportive community around Ireland’s high-growth entrepreneurs.

“This year our shortlist has everything from fast food to energy, with many of the entrepreneurs representing businesses that are household names. Cutting-edge technology businesses are prominent again this year, alongside a strong mix of more traditional businesses,” said Kevin McLoughlin, EY partner lead for the awards.

“The standard of the finalists this year is reflective of a very healthy entrepreneurial community, he added.

The finalists in the international category are: Richard Kennedy of Devenish; Andrew Day of Keywords Studios; Lily Holmes of PB Machine Tech; Paul McKenna of Mac-Group; Philip Noone of Aalto Bio; Shane Evans of Scapinghub; Brian Leslie of Seaquest Systems; and Lulu O’Sullivan of GiftsDirect.com/TheIrishStore.com.

As part of the programme, the 24 finalists will join more than 60 other entrepreneurs for a week-long “CEO Retreat” to Hong Kong, Shenzhen and Macau next month.

1 KBC Ireland fined €18.3m for ‘unconscionable’ tracker scandal role
2 The wealth of the Irish – how do your assets match up?
3 Will Facebook walk away from European market after data protection 'hissy fit'?
4 Dunnes Stores set to enter grocery delivery market
5 Irish company to test vaccines on volunteers deliberately infected with Covid-19
6 Dublin and Cork airports look at setting up pre-flight Covid testing centres
7 Willie Walsh joins CarTrawler as deputy chairman
8 Eir takes on extra staff as ComReg chases it on complaints
9 Bank of Ireland sees more than 1,400 staff apply for redundancy
10 Air travel never going ‘back to way it was’
Real news has value SUBSCRIBE