Working 9 to 9, Trump’s ‘flying water tankers’ and the end of plastic can rings

Planet Business: Sometimes it’s quite handy being a billionaire 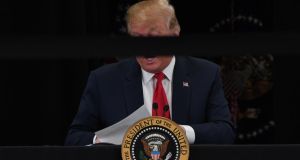 Image of the week: On the ropes

As the Brexit contingent take a relative breather (Theresa May has gone hill-walking in Wales), there’s plenty of time in the news cycle to remind ourselves of the existence of Donald Trump, pictured here in arty fashion at a roundtable discussion on the economy and tax reform in Burnsville, Minnesota. The US president’s face has not been censored, but is partially obscured by a rope that happened to be in front of the photographer.

Trump, who notoriously refuses to release his own tax returns, broke off from touting tax cuts to say a few words about the fire at Notre Dame, noting that it was a “terrible sight to behold” and explaining to his audience that it was “burning at a level that you rarely see a fire burn”. This was after he offered French fire services his top tip of using “flying water tankers” on the historic cathedral – an approach that would, in fact, have hastened its collapse.

12 Hours in the working day prevalent in China’s tech sector culture, where people commonly work 9am to 9pm six days a week, or 72 hours.

9-9-6 How the practice is referred to in China. Alibaba founder Jack Ma stirred up controversy this week by referring it to “a huge blessing”, saying “if you don’t work 9-9-6 when you are young, when can you ever work 9-9-6?” When you’re dead?

40 The average working week is not meant to exceed this number of hours under Chinese labour laws. The ecommerce entrepreneur later softened his comments, calling it “unhealthy”, “inhumane” and “unsustainable” for employers to force people to work the 9-9-6.

Getting to know: Francois-Henri Pinault

Francois-Henri Pinault, the chief executive and chairman of luxury goods group Kering, is among the French super-rich who will donate to the cause of rebuilding the Notre Dame after the cathedral in Paris was badly damaged by fire on Monday. Worth at least $15 billion (€13.2 billion), the boss of the company behind brands such as Gucci, Yves Saint Laurent and Alexander McQueen, and his family, swiftly pledged €100 million to the cause. Other big-bucks donations – €200 million each – have been promised from the families behind rival groups LVMH and L’Oréal, while oil and gas company Total is also donating €100 million.

“Faced with this tragedy, everyone wishes to give life back to this jewel of our heritage as soon as possible,” said Pinault, whose father (82) is the world’s 23rd richest person with a fortune estimated at $37 billion (€32.7 billion). Pinault himself (56) married Hollywood star Salma Hayek in 2009 at a ceremony held in Venice’s Teatro La Fenice – an opera house that has been destroyed by fire three times in its history.

Customer pressure on consumer goods companies to cut their use of plastic packaging appears to be yielding results.

1. Diageo The drinks giant is removing the horrid plastic ring carriers from multipack cans of Guinness, Rockshore, Harp and Smithwick’s and replacing them with biodegradable cardboard.

2. Carlsberg The Danish brewer has already ditched plastic rings on can packages for recyclable glue in what it calls “snap packs”.

3. Nestle The Swiss company’s initiatives include replacing plastic straws by paper ones strong enough to pierce the holes on its cartons. However, campaigners have called on it to ditch single-use plastic entirely.

4. Unilever The consumer goods behemoth is targeting 100 per cent reusable, recyclable or compostable packaging materials by 2025 and 50 per cent by the end of this year. (Environmental protestors point out that “recyclable” does not mean that the plastic is actually recycled.)

5. Coca-Cola Chief executive James Quincey has warned against a tendency to “romanticise” a world without packaging, saying modern containers reduce food spoilage and waste and limit the spread of disease. Nevertheless, the soft-drinks maker and newish owner of Costa Coffee says all of its packaging will be recyclable by 2030.