EU to seek rapid tariff-reduction deal with the US 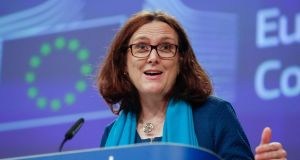 The EU’s top trade official said on Monday she would seek a rapid tariff-reduction deal with the US, after European governments backed negotiations aimed at easing transatlantic tensions.

Cecilia Malmstrom said Brussels “will do everything it can” to reach a deal with the US by November 1st on a “limited but meaningful” agreement that would slash tariffs on industrial goods.

But the EU trade chief admitted the two sides had not agreed what should be covered in the negotiations, with Europe having firmly rejected Washington’s demand that a deal should include greater export opportunities for US farmers.

The talks are a priority for Berlin and other EU capitals, which see them as a way to engage with the Trump administration and convince the US president not to follow through on threats to hit Europe’s car sector with punitive tariffs.

Alongside his trade war with China, Mr Trump has repeatedly threatened the EU with tariffs as a way to address what he sees as an unfairly skewed trading relationship. Last year he hit EU steel exports with additional duties, prompting Brussels to impose retaliatory tariffs.

The EU and the US are also at a sensitive moment in their long-running feud over illegal subsidies to Airbus and Boeing, with both sides preparing extensive lists of products that could be targeted for retaliation.

The negotiations on industrial goods were part of an accord reached last year by Mr Trump and European Commission president Jean-Claude Juncker to work together to address irritants in the trading relationship rather than resort to unilateral measures.

On Monday, Ms Malmstrom said the new talks were an “essential” step to “end a self-defeating cycle of measures and countermeasures”

The negotiations were endorsed after EU governments overrode French objections on the grounds that the US had not committed to the 2015 Paris climate accord.

The French decision to vote against the talks followed unsuccessful attempts by Paris to delay the approval of the negotiating mandate until after European Parliament elections in May.

Washington is insisting that a trade deal must include the EU opening up its agriculture market to greater competition, despite this being comprehensively rejected by European governments.

The US Congress “has a different template” for the negotiations, Ms Malmstrom acknowledged, adding that Brussels had been clear “from the beginning” that agriculture would not be covered.

But she said that a deal focused on industrial goods could bring “quick tangible benefits, increasing EU exports to the US by 8 per cent and US exports to the EU by 9 per cent.

“Now the ball is in the court of the US to see when we can start,” Ms Malmstrom said, adding that her objective was to complete negotiations by when she leaves office at the end of October. - Copyright The Financial Times Limited 2019