Earnings season: time to take analysts with a pinch of salt

Analysts are often overworked, overconfident and poor at spotting lies 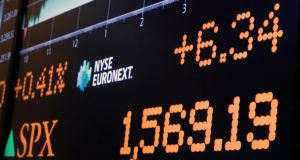 Analysts tend to get it wrong when companies are strongly outperforming or underperforming relative to others in their sector, according to a 2013 study. Photograph: Brendan McDermid/Reuters

Earnings season is now under way in the United States, so market analysts will be kept busy in the coming weeks, chopping and changing their earnings forecasts as companies update their numbers.

It’s well known that analyst estimates should be taken with a pinch of salt; here are five human factors that explain why all too often, the analysts get it wrong.

As far back as 1946, social psychologist Solomon Asch was able to show that people will have a more positive impression of someone described as intelligent, industrious, impulsive, critical, stubborn and envious than if the same descriptors are used in reverse. Countless psychological studies have since borne out Asch’s contention that first impressions last, and it appears analysts are no different.

First Impressions and Analyst Forecast Bias, a new study co-authored by University of California behavioural finance expert Prof David Hirshleifer, finds that if a company does well in the year before an analyst follows it, that same analyst tends to make more optimistic forecasts towards the company than other analysts covering the same firm. Similarly, if the company does poorly in the year prior to the analyst covering the company, that analyst tends to be influenced by their negative first impression, making more pessimistic earnings and price forecasts.

Consistent with the psychological literature, negative first impressions tend to be stronger and last longer than positive first impressions. Analysts are not the only people who should be conscious of this unconscious bias. A recent Finnish study investigated whether lower initial returns would influence the likelihood that an investor would return to stock-market investing after a period of absence. Sure enough, investors with poorer initial returns were less likely to return to investing, even if they had subsequently enjoyed perfectly respectable returns.

For both analysts and investors, first impressions last.

Earnings season is always a frantic time for analysts, who must cover multiple companies and issue several forecasts in a single day. That hectic schedule can result in poorer work, according to Decision Fatigue and Heuristic Analyst Forecasts, another recent Hirshleifer study.

It’s all suggestive of “decision fatigue”, as is the fact that analysts are more likely on busy days to issue a rounded forecast (forecasts ending with zero or five). Separate research has shown that rounded forecasts tend to be less accurate, with Hirshleifer suggesting that tired analysts are more likely to resort to them “instead of exerting the mental effort required to provide a more accurate estimate”.

The dangers of decision fatigue were noted by American hedge fund Voss Capital in 2016. Citing research from Nobel laureate and behavioural finance guru Daniel Kahneman, the firm warned in a letter to investors against “taking pride in working 100-hour weeks”, instead emphasising the importance of “frequent breaks, media-fasting days, off-site reading days, periodic ‘off the grid’ vacations, and even intraday naps or meditation to replenish ego”.

Analysts tend to get it wrong when companies are strongly outperforming or underperforming relative to others in their sector, according to a 2013 study, The Role of Anchoring Bias in the Equity Market. It found analysts’ forecasts tend to be too optimistic when a company’s expected earnings are lower than the industry average, and too pessimistic when a company’s forecast earnings are higher than the industry average.

Why? Analysts are anchoring towards the industry norm, the study suggests, instinctively viewing estimates that are below the sector average as too low and estimates that are above the average as too high. That’s a mistake – there tend to be perfectly good fundamental reasons as to why some companies are doing especially well or especially poorly.

A wealth of academic literature confirms that investors tend to be an overconfident lot and that this overconfidence costs them. Analysts are no different. One study, Does Past Success Lead Analysts to Become Overconfident?, found that the most accurate analysts over the previous year tend to be less accurate and further from the consensus forecasts in their subsequent earnings predictions.

The results suggest an “attribution bias that leads analysts who have experienced a short-lived success to become overconfident in their ability to forecast future earnings”, the study concluded.

A certain number of companies chance it during earnings season, inflating their earnings numbers and presenting all is sweetness and light when the reality may be anything but. Investors shouldn’t expect analysts to see through the lies, judging by the results of a 2015 analyst survey published in the Journal of Behavioural Finance.

Analysts were shown a series of statements that were either truthful or deceptive, with some of these statements pertaining to fraudulent company conference calls. Although two-thirds of the analysts said they could detect when people were lying, the reality was that they were able to detect lies just over half of the time – no better than lay people or any other group.

Like most people, analysts tended to believe that liars would be more likely to be fidgety and to avert their gaze, but the research actually indicates there is next to no difference in the body language of liars and people telling the truth. Verbal cues – implausible, inconsistent, non-immediate and indirect statements – are more reliable than non-verbal cues, the researchers said.

Ironically, the analysts did poorer when it came to financial questions; they were too trusting and displayed a “significant truth bias”, with only 39 per cent of the financial statements judged to be lies.