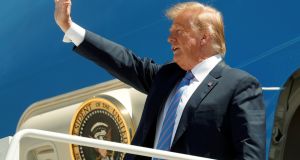 New research suggests the outflow of funds from Ireland in the wake of President Donald Trump’s recent tax cuts was the repatriation of US profits previously held offshore. Photograph: Kevin Lamarque/Reuters

Ireland stands to gain from changes to the US tax code despite a near €50 billion outflow of assets since last year, a new study has claimed.

The research, entitled Ireland and the Changing Global Foreign Direct Investment (FDI), suggests the outflow of funds from Ireland in the wake of President Donald Trump’s recent tax cuts was merely the repatriation of US profits previously held offshore, which would have little or no impact on domestic activity here.

The report also claimed that the US shift to a more territorial tax system, one where companies are taxed based on the location of profits rather than their corporate residence, further incentivises overseas investment, of which Ireland is the main beneficiary.

Overall the positive effects for Ireland are likely to outweigh the negatives, the report, which was commissioned by the Institute of International and European Affairs (IIEA), concluded.

According to the Central Bank, US firms have pulled about €50 billion out of Ireland since the US tax changes came into force last year.

While this outflow falls under the definition of Foreign Direct Investment (FDI), the report’s author Frank Barry said “it’s really only cash, it’s not real investment. It has no economic footprint.”

He also noted that while the US changes had reduced the incentive to keep earnings offshore by moving to a more territorial system they had also made it less punitive for US firms to invest overseas.

Prof Barry, an economist at Trinity College’s Dublin school of business, said the ability of Ireland to remain an attractive location for US multinationals over the longer term depends on its ability to retain its sovereignty on the issue of corporation tax.

The “greatest challenge” to this is likely to come from the push for increased fiscal integration across the euro zone, particularly proposals for a common consolidated corporate tax base.

European Commission proposals to harmonise corporate tax rates across the euro area, which are supported by France and Germany, could see the Irish exchequer lose up to €5 billion or 50 per cent of its current corporation tax base while significantly reducing the appeal of the State’s 12.5 per cent headline rate.

Prof Barry’s report argues that despite intensified global FDI competition over the last number of decades, Ireland has remained a leading export-platform location and this testifies to the learning capacity of the Irish FDI policy-making system.

While Brexit poses the most immediate challenge, particularly to Ireland’s agri-food sector, his research contends that Ireland’s track-record as a base for export-platform operations makes it an attractive option should the UK not gain unimpeded access to the EU27 market.

This could see a counterflow of UK agri-food firms, mainly small-to-medium sized entities, opting to locate here to gain access to the EU market. While this would not outweigh the expected damaged to the industry here, it was an aspect of Brexit that the current analysis had paid little attention to, Prof Barry said.