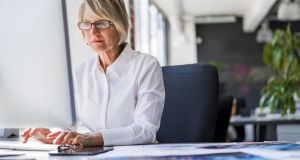 The CSO figures also indicate that while the gender differential in the participation rates between men and women here is falling, it remains wide

Central Statistics Office (CSO) figures show the participation rate for women of a working age in the second quarter of 2019 was 56 per cent. This compares to an EU average of 57.9 per cent and a rate of just over 70 per cent in Germany.

The CSO figures also indicate that while the gender differential in the participation rates between men and women here is falling, it remains wide – 68.4 per cent for men compared to 56 per cent for women.

And when it comes to people with children the gap widens further. The participation rate of males in couples with children was 88.2 per cent in the second quarter compared to 68.1 per cent for women.

“This throws light on the fact that although household roles may be changing, the pace of change is slow and women still very much assume the stay-at-home parent and home maker role,” Joanna Murphy, chief executive of the consumer website Taxback. com, said.

“This has huge implications for the financial positions of men and women throughout the country and the disparity that exists between the two,” she said.

“The gender pay gap is very much influenced by the fact that women often leave the workforce for extended periods of time while on maternity leave and/or to raise a family, and if they do return to work, they often find it difficult if not impossible to make up for that lost time when it comes to pay grades,” she said.

“Not only is day-to-day financial independence impacted but so too is retirement provision and it’s been well documented that this is an area in which women are particularly exposed,” she added.

“Ireland needs to ensure parity between men and women when it comes to pay and opportunities in the workforce. We also need to make is easier and more financially feasible for women with families to stay in or re-join the workforce should they so wish,” Mr Murphy said.

Despite 28 consecutive quarters of employment growth stretching back to 2012, the headline labour force participation rate for both men and women at 62.1 per cent is significantly lower than the boom time high of 66.7 per cent recorded in the first quarter of 2007.

1 Google completes purchase of Treasury Building for €120m
2 Knock gets visit from world’s largest passenger plane
3 Varadkar resigns amid warning impasse will hit the economy
4 Garda mobile contract win causes concern over Eir’s use of Huawei kit
5 Appeals board grants planning for 354 Greystones homes
6 Billionaire Zara founder and German funds vie for prime Dublin offices
7 Beau Lotto: How to rewire our brains to spark innovation
8 Nineteen staff made redundant by Nama share €1m
9 How do you know if you are wealthy? It’s not straightforward
10 A maverick taking on the Irish whiskey establishment
Real news has value SUBSCRIBE