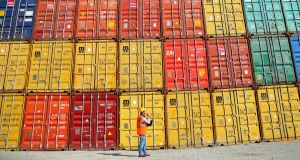 The OECD downgraded the economic forecasts for almost all of the countries it examined, citing trade tensions among the drivers. Photograph: iStock

Ireland will suffer the biggest negative shock from a no-deal Brexit outside the UK, the Organisation for Economic Co-operation and Development (OECD) has warned.

In its latest world economic health check, which warns of shrinking global growth amid a spike in trade tensions, the Paris-based think tank assesses the near-term impact of a no-deal Brexit.

It suggests that even with a relatively smooth adjustment, Irish economic growth will be cut by 1.5 per cent in 2020 and 2021, compared with 2 per cent in the UK itself.

Exports from the other EU economies to the UK are estimated to decline by about 16 per cent as a result of higher trade costs, with the largest effects being felt in Ireland.

The OECD said a no-deal exit would generate a large negative shock to the UK economy, pushing it into recession, while damaging growth prospects here.

The initial impact for both economies will be driven largely by “the trade and uncertainty shocks, but over time the adverse supply-side costs begin to emerge”, it said.

The impact on other EU member states will depend on the extent of their direct trade with the UK, their role in supply chains for exports to the UK and, over time, the extent to which they might be able to fill markets in which UK exporters have become less competitive.

The OECD said total export volumes (to all economies) are assumed to decline by 1.25 per cent in the EU economies as a whole in the near term, with the largest declines in Ireland, the Netherlands, Belgium, Germany and Spain, reflecting the relative importance of the UK in their export markets.

The adverse effects on long-term supply could also be expected to raise the cost of government borrowing here, at least temporarily, reflecting market uncertainty about future growth prospects and policies, it said.

The OECD said its assessment was predicated on there being a smooth adjustment, helped by the preparations made by the Irish and UK governments and the European Commission to limit the immediate disruptions to trade, financial markets and passenger movements.

However, it warned that “if preparations to Border infrastructure fail to prevent significant delays, or if financial market conditions were to deteriorate considerably, or if consumer confidence were to decline sharply, the near-term impact of a no-deal Brexit could be much more costly”.

In its wider report on the global economy, the OECD said the world’s leading economies needed to ease trade tensions and act decisively to prevent a descent into a low-growth trap from which it would be difficult to escape.

Labelling the economic outlook as “increasingly fragile and uncertain”, the Paris-based international organisation forecast that Britain would fall into recession if it left the EU without a deal, and euro zone growth would slow to close to zero.

Evidence is accumulating that the effects of trade tensions are greater than previously thought, the OECD said, urging all countries to stop erecting tit-for-tat trade barriers and to fight the economic slowdown with a fiscal stimulus, where public finances allowed.

The OECD downgraded the economic forecasts for almost all of the countries it examined, cutting its global growth projection for 2019 by 0.3 percentage points to 2.9 per cent, the weakest performance since the 2008-09 financial crisis.

With little improvement foreseen in 2020 and big forecast downgrades, OECD chief economist Laurence Boone said: “The danger is that we get into a vicious circle of lower trade, investment and higher uncertainty.”

She blamed multiple trade tensions, ranging from the US and China’s battle over tariffs to the skirmishes between South Korea and Japan on crucial goods for technology supply chains and the US threats to impose tariffs on European car imports.

“The speed that trade tensions are materialising is worrying,” she said, adding that the effects “can be seen in how trade [volume] growth has collapsed.”

“Collective effort is urgent to halt the build-up of trade-distorting tariffs and subsidies and to restore a transparent and predictable rules-based system that encourages businesses to invest,” the OECD said as it warned that companies would not want to invest in today’s uncertain climate. – Additional reporting: Copyright The Financial Times Limited 2019

1 Irish designer of Oxford vaccine: ‘I’ve never worked so hard in my life’
2 BOI customers to be charged twice with bank fees on New Year’s Eve
3 We continue to ignore massive pensions elephant in the room
4 O’Flynn and BlackRock to double money with €100m sale of former HP campus
5 What does it take to get banned from social media? More than you’d think
6 Goldman Sachs advises on Ulster Bank’s future, health insurance premiums to rise, and 200 new jobs for Microsoft
7 Why am I paying Irish tax on income already taxed in Canada?
8 Q&A: Dominic Coyle – Claiming back tax on US dividends?
9 CRH teams up with Aboitiz to acquire Lafarge assets
10 Chris Johns: I think we are on the cusp of an economic boom
Real news has value SUBSCRIBE