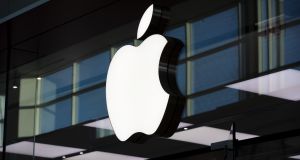 The case stems from an EU inquiry after Apple chief executive Tim Cook told a US Senate subcommittee in May 2013 that his group paid an effective tax rate of below 2% in Ireland over the previous decade. Photograph: Bloomberg

A lawyer for Apple has rejected claims by the European Commission that its alleged sweetheart tax deal with Ireland was partly designed to give the iPhone maker a boost in exchange for creating jobs in Cork.

The commission concluded in August 2016 that Apple received an unfair advantage in Ireland as a result of two “rulings” by Revenue – in 1991 and 2007 – on how the US technology giant carried out its tax affairs in the State. The commission ordered the Government to collect €13 billion of back taxes, plus interest, as a result.

The 1991 ruling that minimised Apple’s tax liabilities “appears to have been arrived at through negotiation and to have been dependent on employment considerations”, according to the commission.

However, Daniel Beard, a lawyer for Apple, told the EU’s second-highest court, the General Court in Luxembourg, on Tuesday that the commission’s assertion that jobs played a key role was based on media commentary, rather than fact.

“After the 1991 ruling, employment in Apple actually fell in Ireland,” said Mr Beard. His submission came as the court began to hear oral evidence as part of an appeal by the Government and Apple against the commission’s decision. The hearings are set to close on Wednesday evening.

Apple established a base in Cork in 1980 and employs about 6,000 people there now.

The commission’s main claim is that Revenue gave Apple an unfair advantage in the two rulings, which allowed the US technology group to channel most of its European sales through “head office” divisions of two group subsidiaries in Cork, which were non-resident for tax purposes.

These units are known as Apple Sales International (ASI) and Apple Operations Europe (AOE). Only profits allocated to Irish “branches” within those subsidiaries were taxed in the State.

“The commission’s conclusion is astonishing,” said former attorney general Paul Gallagher, the lead barrister presenting the Government’s case to the court. He added that “only routine activities” were carried out in Cork and that the Irish offices conducted no research and development and held no intellectual property.

Mr Beard said the EU “sought headlines by quoting tiny numbers” in the Apple case – such as the assertion that ASI paid only an effective tax rate of 0.005 per cent on its profits in 2014.

“But this public campaign ignores the taxes Apple pays all across the world,” he said.

What are the origins of this case?

The case stems from an EU investigation instigated after Apple chief executive Tim Cook told a US Senate subcommittee in May 2013 that his group paid an effective tax rate of less than 2 per cent in Ireland over the previous decade.

The Government and Apple moved within months of the commission’s decision in August 2016 to launch appeals. But the State collected the €13 billion, plus €1.3 billion of interest, from the California-based group last year and put the money into an escrow account pending the outcome of appeals.

Ireland’s position is being supported before the court by Luxembourg, another country targeted by the commission in recent years over its tax rulings, while Poland and the European Free Trade Association Surveillance Authority have lent their support to the commission.

A ruling by the General Court, expected as early as the end of 2019, is likely to be appealed before the Court of Justice of the European Union, the bloc’s highest court – meaning the case could run for up to four years before a final verdict is reached.