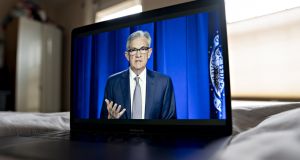 Jerome Powell, chairman of the US Federal Reserve, speaks during a virtual news conference seen on a laptop computer in Arlington, Virginia, on June 10th. The Federal Reserve put a floor under its large-scale asset purchases and projected interest rates will remain near zero through at least 2022 as policy makers seek to speed the economy’s recovery from the coronavirus recession. Photograph: Andrew Harrer/Bloomberg

Federal Reserve officials predicted that they would keep interest rates close to zero until at least the end of 2022, as the US central bank said it remained “committed” to bolstering an economy hit by the pandemic.

The dovish tone from the Fed, which is expecting the US economy to contract by 6.5 per cent this year, with unemployment falling to 9.3 per cent, followed an earlier than expected rebound in job creation last month, which raised hopes of a faster recovery.

In a policy statement that contained no new actions and was mostly unchanged compared with April, the Federal Open Market Committee said: “The Federal Reserve is committed to using its full range of tools to support the US economy in this challenging time, thereby promoting its maximum employment and price stability goals”.

The Fed’s economic projections were the first provided by the central bank since last December, before the coronavirus spread.

After this year’s blow to output and employment, the median forecast of Fed officials was for a rebound in 2021 involving growth of 5 per cent with joblessness dropping to 6.5 per cent. All but two Fed officials predicted that the Fed’s main interest rate would remain close to zero through 2022.

“This is a Fed that is going to be quite dovish,” he said. “This Fed is very much on hold for the foreseeable future and wants to do what it can to provide additional stimulus and help the economy.”

Since early March, the US central bank has delivered a series of extraordinary policy moves and interventions to calm investors and protect the economy from volatility and damage inflicted by the disease and its restrictions on activity.

In addition to slashing its main interest rate, the Fed has also sharply expanded its balance sheet with open-ended asset purchases and set up a series of emergency lending facilities to provide credit to struggling businesses and local authorities.

The Fed’s steps - which exceeded in both scale and speed the measures adopted during the financial crisis - contributed to a rapid recovery in US equity markets, which have since regained all of the ground lost since the start of the year.

The S&P 500 turned positive immediately after the Fed’s announcement, but pared those gains as the central bank chairman Jay Powell’s press conference got underway. Meanwhile, Treasuries rallied, extending gains that retraced some of the declines seen in recent weeks, when the yield on the benchmark 10-year note rose to its highest level since March. Yields fall as prices rise.

The market rebound has given Fed policymakers some breathing room to consider their next steps, including whether to set up a defined programme of asset purchases, and more precise guidance on the conditions it would take to start tightening monetary policy.

On Wednesday, the Fed said it would increase its holding of government debt “at least at the current pace to sustain smooth market functioning”. The central bank is currently buying approximately $20 billion (€17.6 billion) of Treasuries a week, or an average of $4 billion a day.

Bank of America’s Mr Cabana welcomed the move, adding that it is “quite useful for markets to have clarity as to the Fed’s intentions on asset purchases”.

While financial markets have stabilised, the US economy has taken a huge hit and is facing a painful, lengthy recovery. According to labour department data, US employers unexpectedly boosted hiring by 2.5m jobs in May - but that still left employment 19.5m positions below where it was at the start of the year for an unemployment rate of 13.3 per cent in May.

The Fed has been counting on Congress and the White House to continue providing fiscal support to the US economy, on top of the $3tn in stimulus already passed since the crisis began. But the likely size of a new package has fallen and the timing of any deal has slipped as Republicans have balked at additional spending on aid to local government and an extension of jobless benefits.

Steven Mnuchin, the US Treasury secretary, signalled to Congress on Wednesday morning that the next round of US fiscal stimulus legislation would be more limited and it could take weeks to see a deal.

“At the point when we were in an emergency we had to put a lot of money into the economy and we knew that it would not be perfection, but whatever we do going forward needs to be much more targeted, particularly to industries and small businesses that are having the most difficult reopening,” the Treasury secretary said.

1 ‘They’re not making any more land, so it will be valuable’
2 Wet pub openings fuelled rise in Irish Covid infection rates – report
3 Covid-19 weighs on law firms as two in three report drop in revenue
4 Cliff Taylor: Deal or no deal we are now heading for a hard Brexit
5 Irish start-up which developed facial recognition for cows raising over $50m
6 ‘I don’t need to do any of this. . .I don’t actually need to work.’
7 How long can Government afford to keep State pension age at 66?
8 Promontoria barred from pursuing doctor over Ulster Bank loan
9 Profits jump threefold at LinkedIn’s Irish unit to $294.2m
10 Samsung Galaxy Tab S6 Lite: Lighter in price and spec, but still pulls its weight
Real news has value SUBSCRIBE