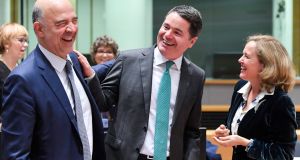 Minister for Finance Paschal Donohoe is likely to be a candidate to head the group of Eurozone finance ministers but only if a new government is formed in the coming weeks and he retains the finance portfolio.

The Eurogroup is an informal body with no official status but it is one of the most powerful groups in the EU, playing a crucial role during the financial crisis a decade ago, and likely to be equally important in the coming years as the EU deals with the costs of the coronavirus crisis and the tentative moves towards sharing the costs through joint EU debt.

The Portuguese finance minister Mário Centeno has announced that he will not seek reappointment when his two and a half year term comes to an end in July, and Mr Donohoe is understood to be interested in the post. Other names touted in Brussels are the Spanish finance minister Nadia Calviño and Luxembourg’s Pierre Gramegna, both thought to be in the running.

Mr Donohoe is likely to be a strong candidate, having nurtured relationships with both northern European countries through Ireland’s membership of the Hanseatic group, but also standing with the southern countries in their recent call for joint EU debt instruments to deal with the coronavirus pandemic.

However, to be a candidate, he will have to be finance minister – a fate that depends on the formation of a government in the coming weeks. That outcome hangs in the balance as government formation talks continue between the Green Party, Fine Gael and Fianna Fáil.

While selection of ministers would be a matter for the new taoiseach, in agreement with the leaders of the parties, it is widely expected that Mr Donohoe would retain the finance portfolio. The Eurogroup job would be undertaken in tandem with his domestic responsibilities.

Sources in Brussels confirmed that Mr Donohoe’s name was being touted for the job along with the other two candidates. If there is a contest for the post, it will take place at the finance ministers’ meeting on July 9th.

“He’s very much liked in the group, he’s really appreciated, people listen when he talks, he communicates very well. Ireland is a country that is perceived as being an in-between country. It’s not the north, it’s not the south, it has had its crisis periods but turned out very well, it’s growing very fast, it’s an example of economic growth,” said one source.

“[Ireland] is not seen as a Hanseatic league or a southern country, it’s an independent country, it’s balanced. He’s been there for a while so people know him. With the Brexit story he gained a lot of respect and solidarity in the group because people felt Ireland was under the spotlight.

“If niceness is an indication he is the best positioned candidate. But there are games that are played. North-south, political parties play a political role, there may be solidarity between regions on different topics. The dynamics are very complex.

“I think the Irish candidate could be the compromise proposal, but this needs to find a majority. There’s a political process at the start. If he wants to, he’s a credible candidate.”