Net shipping of goods and services increases by almost €1.9 bn in the first three months 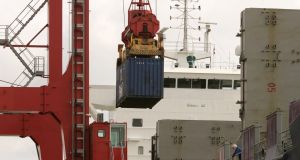 Provisional figures published on Friday show there was a 4.6 per cent rise in GDP compared with the same quarter a year earlier.

The Irish economy expanded by 1.2 per cent in the first quarter of 2020 as exports of IT and pharma offset the domestic impact of Covid-19, according to the Central Statistics Office (CSO).

The agency’s latest quarterly national accounts cover the period up to the end of March, most of which was before the introduction of restrictions to contain the virus.

They show GDP, the standard measure of growth, rose by 1.2 per cent on the previous quarter and was up by 4.6 per cent on an annual basis, while Gross National Product (GNP), which strips out the multinational profit flows, rose by 0.1 per cent in the quarter and by 5.5 per cent year on year.

Net exports of goods and services increased by almost €1.9 billion in the first three months, driving the increase in GDP. In the globalised sectors of the economy, growth continued, the CSO said, with industry increasing by 15.4 per cent in volume terms and the IT sector growing by 1.5 per cent in the quarter.

However, the impact of Covid-19 restrictions could be seen in the domestic-facing sectors, with the distribution, transport, hotels and restaurant sector contracting by 12.7 per cent.

Professional, administrative and support services and agriculture also contracted by 5.3 per cent and 4.7 per cent respectively while construction declined by 1.6 per cent.

There was also a 4.7 per cent decline in personal spending during the first three months as lockdown restrictions came into force.

Separate CSO figures issued on Friday show the overall Live Register hit 225,662 in May while the seasonally adjusted Live Register rose by 8,900 to 226,400 in the month.

The data also shows that, in the last week of May, 543,164 people were in receipt of the pandemic unemployment payment while 436,344 people benefitted from the temporary Covid-19 wage subsidy scheme.

The Minister for Finance Paschal Donohoe said the latest quarterly figures showed the resilience of the economy ahead of the introduction of Covid-19 restrictions.

“Despite a fall in consumption, GDP growth in the first quarter remained robust, supported by solid growth in exports and construction activity,” he said.

Mr Donohoe forecast that with a temporary suspension of all “non-essential” economic activity due to the lockdown in the second quarter, output is expected to be significantly lower. However, he indicated that the worst may be over.

“Incoming data, including ultra-high frequency data, suggest that we are now past the low point and a gradual recovery is now settling in as restrictions are gradually being relaxed.”

Capital investment was still strong at €51.4 billion in the first quarter, driven by imports of intellectual property products to the State. Such imports have a neutral impact on GDP, the CSO noted.

The balance of payments current account, a measure of transactions with the rest of the world, recorded a deficit of €15.3 billion compared with a €11 billion surplus for the same quarter a year earlier. This was largely due to the rise in IP imports and business services, which rose to €51.2 billion versus €18.1 billion in the previous year.

Royalty imports for pharma products were down by almost €1 billion year-on-year with the accumulation of IP products relocated to the State seen as potentially leading to reduced quarterly royalty payments abroad.

The latest figures show a €2.2 billion surplus in trade in goods and services in the first quarter, which was offset by a €3.4 billion deficit in income flows. This left an overall current account deficit with the UK of €1.2 billion.