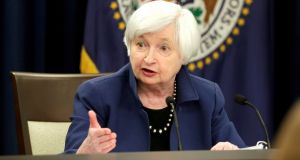 Federal Reserve chair Janet Yellen: she and her colleagues boosted the target range for the federal funds rate of 1 to 1.25 per cent on Wednesday. Photograph: Reuters

The Federal Reserve has defied a string of weak inflation figures as it lifted short-term rates by another quarter point and set out detailed plans for paring back the size of its balance sheet later this year.

Fed chair Janet Yellen and her colleagues boosted the target range for the federal funds rate of 1 to 1.25 per cent on Wednesday, reiterating that they expect inflation to return to target but stressing they are watching low inflation numbers “closely” after a series of disappointing readings.

Fed policymakers stuck with forecasts pointing to further rate increases in the coming years, including a further quarter-point increase by the end of 2017.

For the first time the Fed’s post-meeting statement confirmed that policymakers expect to begin a “normalisation” programme that will reduce the size of a balance sheet that was swollen during crisis-era interventions. In a separate document the Fed for the first time gave detailed figures for how it plans to phase out reinvestments of the proceeds of maturing securities on its $4.5 trillion (€3.7 trillion) balance sheet.

The Fed’s decision is a vote of confidence in its own core message that soggy inflation will be a temporary phenomenon given the strength of the jobs market, where steady hiring has driven the jobless rate down to 4.3 per cent. It comes despite official figures earlier on Wednesday that showed the year-on-year rate of core consumer price inflation, an alternative measure to the Fed’s preferred gauge, receded to 1.7 per cent in May, below expectations for a 1.9 per cent advance.

The pattern of poor core inflation readings has convinced some traders the Fed is misreading the health of the economy, and Neel Kashkari, president of the Federal Reserve Bank of Minneapolis, dissented from the decision to lift rates.

In a nod to worries about low inflation, the post-meeting statement said the committee “is monitoring inflation developments closely” as it noted year-on-year inflation had “declined recently”. But the Fed also dropped previous language signalling it was closely watching overseas and markets developments, signalling more optimism about the global outlook.