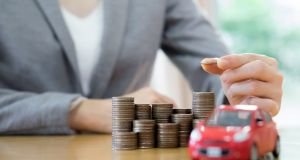 Hire purchase agreements and personal contract plans will not initially be included on the Central Bank’s new Credit Register despite previous assurances to the contrary. (Photograph: iStock)

The Central Bank’s new credit register will not collect any information on car loans or hire purchase agreements in the first phase of its operation, The Irish Times has learned.

An industry source said the Central Bank had given assurances to car finance houses that the register would collect data on car financing.

The source added that their company had spent a considerable amount of money preparing for car finance information to be included in the register only to find out it wasn’t going to be collected as the register comes into force.

The purpose of the register is to provide greater transparency to lenders when people seeking credit apply for a loan.

This means that information on car loans, personal contract plans, and hire purchase agreements will be delayed.

The delay has been caused by a lack of clarity in the provisions of the 2013 Credit Reporting Act which provides for the establishment and maintenance of a register to hold information about “credit applications and credit agreements and parties to them”.

A spokeswoman for the Central Bank said that once a “necessary legislative amendment” to the Act is made, collection of data on car loans will be possible. The bank is “actively engaging with the Department of Finance to progress the amendment”, the spokeswoman added.

Currently, the Irish Credit Bureau (ICB) collects details about credit agreements and it is understood the new Central Credit Register will supersede the ICB.

The ICB is operated and financed by its member institutions which include Ireland’s biggest banks and a raft of credit unions across the country. However, there is no obligation for a credit provider to be a member of the ICB.

A regulatory grey area currently exists in the area of car financing whereby banks are regulated by the Central Bank but non-bank lenders are not regulated at all but are authorised by the CCPC (competition and consumer protection commission).

The CCPC told this newspaper in May that it had “raised the issue of further regulation” with the Department of Finance and the Central Bank.

Sources in the auto industry believe that somewhere between 30 per cent and 50 per cent of new cars bought in Ireland are sold on finance agreements. It is understood there are currently over 500,000 car loans in Ireland.

The Central Bank spokeswoman said the bank hopes to add car loans to the register “as soon as possible” and that it will keep notified firms advised as the situation progresses.