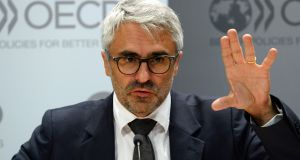 About 70 countries including the Republic launched a new international tax convention on Wednesday to prevent multinational companies from “treaty shopping” for jurisdictions most favourable to their tax bills.

Ministers from major economies signed the new tax pact at the Organisation for Economic Co-operation and Development (OECD) in Paris, which said more countries were likely to join in the coming weeks.

The new agreement will replace more than 1,100 bilateral tax treaties, or about a third of the treaties signed by countries over the last century to avoid double taxation.

In the age of globalisation, multinational countries have increasingly sent cross-border transactions through third countries to take advantage of their low taxes in what has come to be called treaty shopping.

The new treaty sets minimum standards to avoid abuses and defines a company’s taxable presence in a country, while also lays out plans for settling double taxation disputes between governments.

Representing the Republic, the Minister for Finance, Michael Noonan, explained the new arrangements thus: “If you make the widgets in Dublin, the tax liability on the profits from the widgets is an Irish tax liability . . . It will be illegal to transfer tax liability to other jurisdictions to avoid taxes.”

Mr Noonan said the convention meant there now was “full transparency of transactions so the ability to transfer profits is removed from the system”.

Under the new pact, countries have to state which provisions they sign up to and which they do not. In the coming weeks, governments will have to match their positions with those of others.

“This is something that companies are going to need to pay close attention to because the decisions countries make when they sign up to the MLI [multilateral instrument] will have very significant tax consequences,” said Jesse Eggert, principal in the international tax group of KPMG’s Washington national tax practice.

Peter Vale, Grant Thornton tax partner in Dublin, said the treaty would be considered a “big success” by the OECD but he cautioned that it was likely to make it more difficult for Irish companies to do business overseas.

“It also has the potential to suck a portion of profits out of the Irish tax net as it will generally become easier to have a tax presence overseas, particularly when initially entering a new market,” he said, adding that different interpretations of Beps – base erosion and profit shifting – meant a new phase of increased disputes was likely.

Alan Heuston, tax partner at McCann FitzGerald, noted that the new arrangements would allow the Republic to update most of its 72 international tax treaties to ensure they are Beps-compliant without the need for separate bilateral negotiations.

Signatories include most major economies and countries known as treaty shopping hubs – such as the Netherlands, Belgium, the Seychelles and Singapore.

Mauritius, which is often used to route transactions with India because of its low tax, has also signalled that it will sign in the coming months, Saint-Amans said.

One notable absence is the United States. Saint-Amans said that was not a concern because its bilateral treaties were already of high quality.

The new pact is part of a broader OECD-led drive to prevent companies from taking advantages of differences between tax systems to cut their tax bills without outright breaking the law.

The OECD estimates that governments are missing out on tax revenues worth as much as $250 billion (€225 billion) annually, or 10 per cent of global corporate tax revenue, as a result of Beps.

Countries that sign the new treaty now have to ratify it, which means it will probably not start to affect companies directly until next year.