Almost 200,000 employed in multinationals but IDA warns of political uncertainty 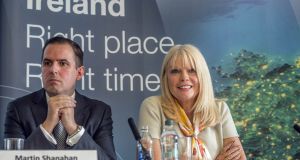 Martin Shanahan, chief executive of IDA Ireland, with Minister for Jobs, Enterprise and Innovation, Mary Mitchell O’Connor: “That companies have continued to invest in Ireland is testament to the quality of the offering we have here,” he said. Photograph: Brenda Fitzsimons

IDA Ireland says the flow of foreign direct investment (FDI) into Ireland will remain strong in coming months after a record 2016, although the State enterprise agency warned against “complacency” over cost-competitiveness and potential threats in the global economy.

At the publication of its annual statement on Tuesday, IDA said the number of investments from companies new to the Irish market went to 99 from 94 in 2016, with 11,842 additional jobs (net) created. Job losses were at their lowest level in 19 years.

Martin Shanahan, chief executive of the IDA, said he expected some US companies to delay investment announcements until details emerged of US president-elect Donald Trump’s trade policies.

He also said some London-based banks were close to choosing alternative locations, as Dublin fights to pick up business amid post-Brexit vote uncertainty.

Mr Shanahan said: “That companies have continued to invest in Ireland is testament to the quality of the offering we have here. That being said – we absolutely cannot be complacent about this success. We have to keep an eye on our competitiveness including costs.

“The contribution of the FDI sector has always been important to Ireland, but the 2016 results show that the contribution has never been greater. It is particularly welcome to see such a broad-based performance and all regions growing. International services, pharmaceuticals and medical devices and financial services all showed significant employment increases in 2016.”

On Brexit, the IDA said the UK’s planned departure from the European Union has led to “a significant volume of specific queries” to IDA offices from across the world, with Ireland among a small number of locations in Europe being considered. However the IDA also noted that Brexit brings with it some “adverse impacts”.

“FDI companies that depend heavily on the UK market have already been impacted by exchange rates and they may also need to consider their future access to the UK market in a post-Brexit environment.”

Looking ahead, Mr Shanahan said that “ongoing global political and economic uncertainty will continue to affect investor confidence in 2017”, while competition from other jurisdictions for FDI has “never been as strong”.

However, the outlook is still “promising”. “While there is significant uncertainty, the jobs pipeline for the first quarter of 2017 looks promising. In 2016, job losses within IDA client companies were at their lowest level since 1997. Given market turmoil, Brexit impacts and cost-competitiveness pressure, IDA does not expect this trend to continue,” Mr Shanahan said.