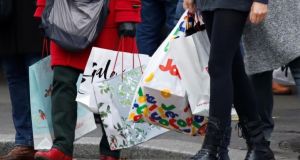 Euro zone consumer prices grew faster than expected in December, an estimate from the European Union’s statistics office, Eurostat, showed on Wednesday, driven mainly by higher costs of energy, as well as food, alcohol and tobacco and services.

Eurostat said prices in the 19 countries sharing the euro rose 1.1 per cent year-on-year last month, sharply accelerating from a 0.6 per cent annual increase in November and 0.5 per cent in October.

The European Central Bank wants to keep inflation below, but close to, 2 per cent and has been buying €60 billion worth of euro zone government bonds each month to inject more cash into the banking system and stimulate price rises in the economy.

Eurostat estimated that energy prices jumped 2.5 per cent year-on-year in December, the first rise in more than a year, while food alcohol and tobacco prices rose 1.2 per cent and services were also 1.2 per cent more expensive than a year earlier.

The factor that held inflation down was non-energy industrial goods, the prices of which rose only 0.3 per cent year-on-year, the same as in the four previous months.