Service providers and factories struggle to keep up with demand 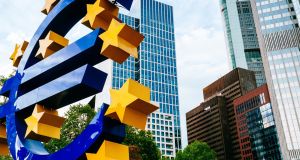 Investors foresee ECB quantitative easing ending this year, with the first rate hike since 2011 coming around the middle of 2019. Photograph: iStock

The euro zone’s private-sector economy grew at the slowest pace in 14 months in March, as service providers and factories struggled to keep up with demand.

A composite purchasing managers’ index by IHS Markit slid to 55.3 from 57.1. That’s below the median estimate of 56.8 in a Bloomberg survey of economists, and marks a second successive decline from the 12-year high reached in January.

“The loss of momentum since the buoyant start to the year has been quite dramatic,” said Chris Williamson, chief business economist at IHS Markit. “At least some of the slowing may be ascribed to bad weather in some northern regions and, perhaps more importantly, ‘growing pains’ resulting from the strength of the recent growth spurt.”

IHS Markit said supply-chain bottlenecks and raw material shortages were reported to have stymied production in manufacturing, with delays in Germany the highest in the survey’s 22-year history. Companies also saw activity being curtailed by growing skill shortages.

Such a trend could complicate the European Central Bank’s debate over when to end its extraordinary monetary stimulus. While officials including president Mario Draghi have called for caution, one of their key reasons is that the economy may have more slack than previously thought.

Investors foresee quantitative easing ending this year, with the first rate hike since 2011 coming around the middle of 2019, just a few months before Mr Draghi’s term as president expires.

The ECB chief has also cited weak inflation and the stronger euro, as well as concerns that US president Donald Trump’s plan to impose tariffs will escalate into a global trade war, as reasons to go slow. – Bloomberg