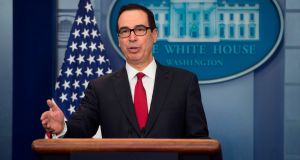 US treasury secretary Steve Mnuchin said on Friday that the US “firmly opposes proposals by any country to single out digital companies”.

A new OECD report on taxing the digital sector shows Ireland is not alone in opposing a European Union plan to impose a sales tax on the big players in the sector as an interim measure, pending long-term international reforms.

The tax, which could cost Ireland several hundred million euro in lost revenue each year, will be proposed by the European Commission next week and discussed by EU leaders at a summit meeting next Friday.

The OECD report showed there was no international consensus on the commission’s interim sales tax plan, according to senior Government officials in Dublin. Ireland would not be alone in the EU in having serious reservations about the proposal, they believe, with a number of other countries – mainly smaller member states – taking the same approach. Corporate tax decisions require consensus at EU level and officials here do not believe that the commission can easily find a way around this requirement.

The OECD published its report on digital taxation as part of its programme to seek reforms of corporate taxation. The OECD will publish a final version in 2020 and provide an update in 2019 and said it is working towards a “consensus-based solution”.

However, the pace of the OECD reforms have left the bigger EU states frustrated. This has led to a separate commission report on digital tax, also looking at long-term reform but also an interim revenue tax on digital sales in the EU. This would relate to online platforms and advertising, aimed at global giants such as Google, Facebook and Airbnb and Amazon.

The OECD report is not recommending any interim measures itself , according to Feargal O’Rourke, managing partner at PWC, instead calling for an agreed long-term reform programme. This has given Ireland and other like-minded countries cover to oppose the commission’s proposed interim tax, he said.

Reports have said the commission will recommend a rate of 3 per cent for the interim tax, aiming to raise close to €5 billion a year across Europe. If these reports are correct, Mr O’Rourke estimates that the cost to the Irish exchequer, were the tax to be introduced, would potentially run to some hundreds of millions of euro.

Laying down a marker ahead of the publication of the commission’s report on digital tax next Wednesday, US treasury secretary Steve Mnuchin said on Friday that the US “firmly opposes proposals by any country to single out digital companies. Some of these companies are among the greatest contributors to US job creation and economic growth.” – Additional reporting: Bloomberg