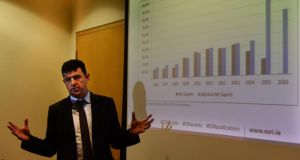 The Government and the Central Statistics Office (CSO) have been urged to adopt a separate set of national accounts to weed out the statistical noise coming from multinationals.

In its latest economic commentary, the Economic and Social Research Institute (ESRI) said it had become “practically impossible” to gauge economic activity here or work out an estimate of sustainable growth with the current set of indicators.

The think tank said headline growth and its components were being distorted by large transactions involving a select number of firms. In several cases, these involved the transfer of intellectual property assets to Ireland in the wake of global moves to clamp down on tax avoidance.

“As the economy is growing very strongly, we do need to be able to come up with an estimate of sustainable growth and it is practically impossible to do so with the current set of national accounts,” said ESRI research professor Kieran McQuinn.

The lack of accurate indicators could have serious implications for the Government’s budgetary policy, he said.

The latest set of quarterly national accounts, published last week, suggested the Irish economy grew by 7.8 per cent in gross domestic product (GDP) terms last year, but the CSO cautioned that the actual rate of economic expansion was probably closer to 4 per cent.

While the CSO recently developed a more reliable measure for growth here, known as modified gross national income (GNI*), the ESRI said even this was likely to exaggerate underlying growth. It called for a more comprehensive approach to the preparation of national accounts.

“As well as the standard set of indicators, a parallel set of accounts which are not impacted by these large transactions should also be prepared,” it said.

In its report, the ESRI predicted the Irish economy would grow by 4.8 per cent in GDP terms this year, driven by strong domestic consumption and investment and buoyant trading conditions internationally.

It suggested growth would, however, moderate to 3.9 per cent in 2019 based on a technical assumption that a European Economic Agreement, similar to Norway’s arrangement, was likely to be put in place between the European Union and the UK after it leaves next year.

A separate study by the ESRI, published on Wednesday, suggested Brexit could cost Irish households up to €1,400 a year as the price of food imports rise in the wake of the UK’s departure.

The ESRI said unemployment, which averaged 6.7 per cent last year, was expected to fall to 5.4 per cent this year and 4.5 per cent in 2019, bringing it close to the all-time low of 4.2 per cent, recorded just before the crash.

Four and a half per cent “would be very low by historic standards and underpinning that assumption is that we would have a healthy degree of net inward migration,” Prof McQuinn said.

The ESRI also predicted that increased tax revenues would lead to budget surpluses in 2018 and 2019.

In its latest commentary, the ESRI also warned that a global trade war on foot of US president Donald Trump’s plan to impose tariffs on steel imports would disproportionately hit Ireland because of the small, open nature of the economy here. A 1 per cent drop in global GDP is expected to cause a similar drop in GDP here.

1 Owner of Dundrum Town Centre to sell prized assets
2 Google unveils ‘budget’ Pixel 4a after Covid delay
3 Can a first-time buyer get relief on a buy-to-let home?
4 Brexit: System agreed for Irish goods to skip checks on UK trade
5 Office rentals in Dublin halved in opening six months of year due to Covid-19
6 Pilita Clark: Working from home is starting to pall
7 Thousands back petition demanding State aid for Aer Lingus
8 Over half of Ireland’s businesses in decline following Covid-19 lockdowns
9 Law governing construction pay rates remains pending State appeal
10 Oprah wore my dress to the Oscars to pick up a lifetime award
Real news has value SUBSCRIBE