Government is still trying to assist more than 2,000 Irish citizens in 86 countries 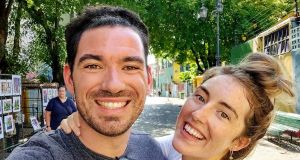 Brian Bateman, from Terenure in Dublin, and Aoife Murphy, from Kilcock in Co Kildare, who have been unable to get a flight back to Ireland.

An Irish couple has issued a plea to the Government to help them get home from Argentina where they have been left stranded due to the coronavirus crisis.

Aoife Murphy (28), from Kilcock in Co Kildare, and Brian Bateman (28), from Terenure in Dublin, left Ireland last October to backpack around the world.

They were due to travel from Argentina through Bolivia, Peru and Ecuador before flying home from Bogota, Colombia, on May 26th.

“We are currently stranded in Buenos Aires,” Ms Murphy said. “Previously we were stranded in a rural hiking town, El Chalten, in southern Argentina. We arrived to El Chalten on March 14th and first tried to leave the town on March 17th.”

However, they were told they were banned from travelling when officials noticed they had spent some time in Chile.

“Local authorities forbid all backpackers from travelling until they complete a 14-day quarantine. On learning this we then checked into a small hostel in El Chalten with 17 other people from around the world.

“The situation evolved so rapidly and continues to do so. The Irish Embassy encouraged us to fly home as soon as possible, but couldn’t even secure a mode of transport to bring us to an airport,” she said.

The couple eventually made it to Buenos Aires where they secured seats on an Air Canada flight to Toronto on Wednesday. They planned to then get a flight to London. However, the Toronto flight was cancelled.

“According to Air Canada, it was due to government implications the flight was cancelled. The airline also didn’t provide an alternative option,” she said. “We are emailing the Irish Embassies in Buenos Aires, in Toronto and Ottawa, to see if they can assist us in getting to Toronto.”

The Government is still trying to assist more than 2,000 Irish citizens who are trying to get back to Ireland from 86 countries.

Liz Canavan, a senior official at the Department of the Taoiseach, said 170 Irish citizens were repatriated from Western Australia, arriving back in Dublin on Thursday.

Hundreds of other Irish citizens who are stranded in parts of Australia have appealed for help from the Government.

Ms Canavan said this week the Government was struggling to help the stranded citizens as countries close off airspace and ground airlines at short notice.

She said officials were working with Aer Lingus and British Airways to try repatriate the 135 Irish citizens, most of them backpackers, who have registered for repatriation from Peru since the country ordered the closure of its borders on March 16th.

She urged any Irish citizen in Peru who had not already done so to contact the Embassy of Ireland in Santiago, Chile, which is the nearest embassy.