A Reuters poll last month had predicted growth of 0.2 % during tje quarter 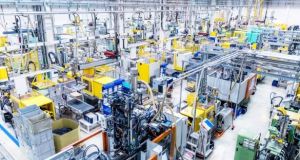 Overall services industry activity stuttered. Its PMI dipped to 51.9 from 52.2, although edging above a 51.5 flash reading

Euro zone business activity stayed near stall speed last month, with manufacturing seemingly continuing to act as a drag on its dominant services industry as well as the economy as a whole, a survey showed.

Despite some optimistic signs in Wednesday’s survey, that picture is likely to disappoint policymakers at the European Central Bank who in September relaunched a €2.6 trillion asset purchase programme designed to stimulate growth and inflation.

That beat a preliminary estimate of 50.3 but remains uncomfortably close to the 50 mark separating growth from contraction.

“Worryingly, the service sector is also on course for its weakest quarterly expansion for five years, hinting strongly that the slowdown continues to spread,” he said.

A Reuters poll last month had predicted growth of 0.2 per cent this quarter.

Offering glimmers of hope, an index measuring demand climbed to the breakeven mark having spent two months below it, firms increased the pace of hiring and optimism was at a four-month high. The new business index was 50.0 compared to October’s 49.6.

“New orders have not shown any growth since August, underscoring the recent weakness of demand, with sharply declining orders for manufactured goods accompanied by substantially weaker gains of new business into the service sector,” Mr Williamson said.

Overall services industry activity stuttered. Its PMI dipped to 51.9 from 52.2, although edging above a 51.5 flash reading.

Still, reflecting some level of increased optimism, firms increased headcount at a faster rate. The employment index nudged up to 53.2 from 53.0.

1 Companies without tax clearance shut out of Covid wage subsidy
2 Moving in and out of lockdown is a recipe for economic disaster
3 Avoca warns of redundancies due to coronavirus
4 Coronavirus spreads to sandwich king
5 Non-executive directors face new paradigm in the boardroom
6 Ufurnish: ‘It’s like Skyscanner, but for furniture’
7 Errant texts highlight weaknesses in banks’ digital shift
8 The Irish Times Deal of the Year: The three finalists
9 The Irish Times Company of the Year: the three finalists
10 Virgin Media vows to withhold sports channels until Eir ‘pays its bill’
Real news has value SUBSCRIBE