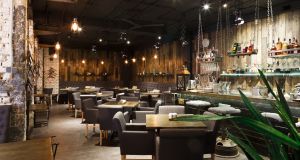 Euro zone business activity collapsed last month as attempts to contain the coronavirus pandemic pushed governments across the continent to shut down vast swathes of their economies, from shops to factories to restaurants, a survey showed on Friday.

The pandemic has infected more than a million people worldwide, paralysing economies as consumers worried about their health and job security stay indoors and rein in spending.

IHS Markit’s final Composite Purchasing Managers’ Index plummeted to a record low of 29.7 in March from February’s 51.6, lower than the flash reading of 31.4 and marking by far its biggest one-month drop since the survey began in July 1998. The 50 mark separates growth from contraction.

“The data indicate that the euro zone economy is already contracting at an annualised rate approaching 10 per cent, with worse inevitably to come in the near future,” said Chris Williamson, chief business economist at IHS Markit.

That was borne out by the survey as demand fell at the fastest rate on record. The new business index sank to 27.7 from 51.2, much weaker than the flash reading of 29.5. Like their manufacturing counterparts, activity in the bloc’s dominant service industry also almost ground to a halt.

A record slump among Britain’s services and manufacturing companies deepened in March while in the Republic, business activity in the services sector registered an unprecedented drop in March, nose-diving into contraction after an implosion in new orders.

The AIB Irish services purchasing managers’ index (PMI) for March details how the index tumbled from 59.9 in February – a two-year high – to 32.5 last month. Any figure below 50 signals contraction.

In Italy, the country’s service sector shrank at the fastest rate in more than 22 years in March with the country’s index diving to 17.4.

China’s services sector , meanwhile,struggled to get back on its feet in March after a brutal month of unprecedented shop closures and public lockdowns amid the coronavirus outbreak, a private survey showed on Friday.