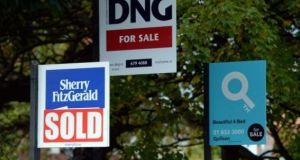 The number of properties available to buy across the State was just under 19,900 in March, down almost 12 per cent year on year.

The residential property market has effectively ground to a halt due to the Covid-19 crisis with fewer than 1,300 properties posted for sale on website Daft.ie over the last two weeks, new figures show.

This is about half the number of properties posted for the same fortnight a year earlier, when 2,574 properties were listed.

“The last few weeks have changed the prospects for the Irish housing market entirely, with the Covid-19 pandemic reaching Ireland and completely disrupting everyday life for weeks and possibly months to come,” said Ronan Lyons, an economist at Trinity College Dublin and author of the Daft.ie report.

“Those going on the market in late March were almost by definition more confident about the future or perhaps less aware of just how serious the health and economic consequences were forecast to be,” he added.

Mr Lyons said it was unlikely that more properties would come on to the market until restrictions ease and everyday life resumes.

He added that so far there was no evidence of prices declining as yet with both buyers and sellers holding off until more is known about the impact of the crisis.

“Covid-19 represents an extraordinary shock to housing demand and we should expect to see significant falls in housing prices – both sale and rental – as the economic effects unwind.”

Mr Lyons said the scale of the decline in prices is unclear at this point but will depend on a number of factors. These include the extent of disruption, the speed of recovery and the impact on numbers employed, average incomes and whether the Republic’s ability to attract foreign direct investment is adversely affected.

The number of properties available to buy across the State was just under 19,900 in March, down almost 12 per cent year on year. This was the first time since late 2006 that fewer than 20,000 homes were on the market and marks the seventh consecutive month where stock on the market has fallen. Availability had improved over the previous year and a half.

The fall in availability was seen in all parts of the State, but particularly in Dublin, where stock has fallen more than 20 per cent during the last 12 months.

During the first quarter, housing prices rose by 2.2 per cent nationally to an average of €256,338. This is 1.7 per cent lower than the same three months a year earlier.

In Dublin and Galway cities prices fell by 2.6 per cent in the year to March and were down 0.7 per cent in Cork city. In Limerick city, prices were 0.9 per cent and were unchanged in Waterford city.

EU court to rule on the Apple state aid case 06:24
Aviva Irish general insurance chief executive sues employer 06:00
Transatlantic data transfers once again in the dock 06:00
‘It’s been quite easy’: Insights from the heart of the remote working revolution 05:37
Osmo is a home-school hero – an app that educates and distracts 05:06

1 ‘It’s been quite easy’: Insights from the heart of the remote working revolution
2 Aviva Irish general insurance chief executive sues employer
3 Transatlantic data transfers once again in the dock
4 FC Barcelona to pursue Nike for compensation over defective shirts
5 Spar-owner BWG explores potential for online shopping ‘pot of gold’
6 What is Covid Tracker Ireland?
7 Osmo is a home-school hero – an app that educates and distracts
8 Key Dublin docklands site primed for €100m sale
9 Denmark’s answer to Ikea signs deal for first Dublin outlet
10 Why gift a son now if it eats into his tax-free inheritance threshold?
Real news has value SUBSCRIBE