Analysis: Evidence to support hopes of swift bounce back for economy fast diminishing 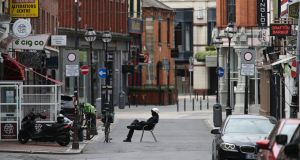 South Anne Street in central Dublin. An economic contraction of between 8 and 15 per cent this year is likely depending on the duration of the lockdown. Photograph: Nick Bradshaw

It took four years for unemployment to reach 16 per cent after the 2008 financial crisis but coronavirus has achieved this grim milestone in less than a month. According to the latest Live Register figures, the number of people claiming jobless benefits or wage subsidies in the Republic tripled to more than half a million in March.

The new 513,000 figure is said to be consistent with an unemployment rate of about 17 per cent. And because this snapshot of the labour market was taken before the Government’s stay-at-home directive on March 27th, the headline rate is expected to keep on rising.

The Central Bank expects it to hit 25 per cent, a figure that corresponds to about 500,000 job losses, and that’s on the basis of the current economic shutdown ending by June and normal activity resuming, a scenario that is by no means assured.

The pace at which the Irish economy has been overtaken by the Covid-19 crisis is like nothing we’ve ever experienced. The economic outlook which pivoted back and forth on the basis of Brexit last year has been washed away.

As have the days of being embarrassed about our high-octane growth rates, snubbed internationally as leprechaun economics. We’re likely to see an economic contraction of between 8 and 15 per cent this year depending on the duration of the lockdown.

And while the nature of the crisis – the fact that is it predicated on a disease that might go as quickly as it came – has given rise to hopes of a swift bounce back economically, the evidence for this is fast diminishing.

The notion that people are simply going to pick up where they left off when the crisis abates is simply not credible. Consumers are likely to remain wary of spending and travelling and even going out to pubs and restaurants for some time to come, which does not bode well for the retail trade, for food and beverage businesses or for the tourism and travel sector.

“I would love to think we’d see some flickers of recovery from September. I have no expectation of anything before that. In reality, this may go on until December and into the new year,” Pat McCann, the boss of hotel chain Dalata, said this week.

In its report, the Central Bank noted that the pace of recovery, when it emerges, is likely to depend on factors such as “the extent to which households and firms have been scarred by the downturn, the degree to which precautionary behaviour unwinds, the recovery in employment and incomes and, possibly also, the degree of stimulus in place to provide some impetus to recovery”.

The key word here is “scarred”. Thousands of businesses simply won’t make it to the other side. Not because they’re loaded with debt or because they are badly run but because few can stomach the loss of business that by definition accompanies the shutdown.

For those companies, having their wage bill picked up by the State or access to cheap credit won’t make a blind bit of difference. And even the big companies aren’t protected. Analysts at Goldman Sachs predict that clothing and homeware sales at retail giant Marks & Spencer could fall by 60 per cent in the three months to the end of June.

As the Central Bank says, the near-term outlook for the economy is very unfavourable and, beyond that, depends on the path of the virus, both domestically and globally.