Commission president’s comments likely to cause disquiet within Government 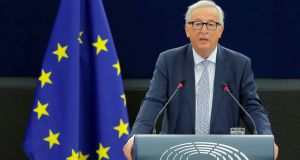 In his annual state-of-the-union address to the European Parliament in Strasbourg, the European Commission president said the EU should move to a system of majority voting.

Brussels is pushing for more co-ordination regarding tax in Europe and an EU-wide digital tax on big tech companies such as Apple and Google, which is opposed by the Irish Government on the grounds that it would choke off multinational investment here.

Nonetheless Mr Juncker said the current practice of unanimous decision-making had blocked major overhauls of tax legislation in Europe and that “companies should pay taxes where they earn their profits”.

In his speech, Mr Juncker also said the commission would propose fining Google, Facebook, Twitter and other online platforms if they failed to remove extremist content within one hour.

Brussels gave internet firms three months in March to show they were acting faster to take down radical posts, but EU regulators say too little is being done without legislation forcing the companies to do so.

The European Commission wants content inciting or advocating extremist offences, promoting extremist groups or showing how to commit such acts to be removed from the web, once flagged, within an hour. “One hour is the decisive time window the greatest damage takes place,” Mr Juncker said.

The president renewed a pledge of close trade and security ties with Britain after Brexit but said the EU would not compromise on key withdrawal terms. He said the EU would not allow Britain to participate only in some parts of the bloc’s single market after Brexit without honouring all of the rules. “This is why we want to find solutions that prevent a hard border in Northern Ireland, ” he said, adding the EU would stand in solidarity with Ireland.

He also said the EU should flex its potential strength as a world power as the US under President Donald Trump pulls back from international engagement, saying that, when united, the EU was a force to be reckoned with.

“Whenever Europe speaks as one, we can impose our position on others,” Mr Juncker said. With the EU still wounded by Britain’s imminent withdrawal, rising nationalism elsewhere and feuding over immigration and democratic values with right-wing eastern leaders such as Hungary’s Viktor Orbán, Mr Juncker insisted the bloc was more united than it might seem and could use that to shape the world to its vision.

As he begins a final year in office that will see Europeans elect a new EU legislature in May, the veteran former premier of Luxembourg noted his successful bid to talk Mr Trump out of an immediate tariff war in July and highlighted new interest from China in working with Brussels to keep world trade flowing free.

Pointing to questions in many countries over Washington’s role as the global economic leader, Mr Juncker also said the euro should be better promoted as a world currency, querying why EU energy imports, for example, are mostly priced in dollars when almost none of them come from the United States.

The commission wants to complete an EU trade pact with Japan by May, one of several deals that is consolidating the EU at the heart of a web of global agreements on standards as Mr Trump has turned Washington against multilateral obligations. He also announced the launch of a new trade relationship with Africa. “Africa does not need charity, but a true and balanced partnership,” he said, proposing a new alliance that would create 10 million jobs in Africa over five years and help African students and researchers go on exchange programmes in Europe.

Mr Juncker also proposed beefing up Europe’s defences against poor Africans heading north by creating a fully Brussels-run European Border and Coast Guard with a full-time strength of 10,000 to help keep back economic migrants whose arrival has fuelled anti-EU nationalism.

Worries over how far hostile parties within and without the European Union might try to manipulate the EU elections also lie behind a proposal to impose fines on politicians caught cheating on data-protection rules and to beef up oversight of campaigning.

Mr Juncker’s legislative proposals will face scrutiny in parliament and from member states, with some of the latter wary of a plan to scrap their veto over some areas of foreign policy in an effort to make the EU a nimbler actor in global diplomacy.