Paschal Donohoe has been leading charge against European Commission measures 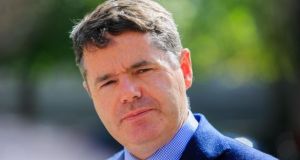 Minister for Finance Paschal Donohoe said he had “articulated our concerns again on the impact of the tax on tax cooperation and open trade internationally”. File photograph: Gareth Chaney/Collins

France’s minister for finance, Bruno Le Maire, has proposed a “sunset clause” on European Commission proposals to tax the profits of digital giants EU-wide in order to make the legislation more palatable.

The move to introduce an automatic deletion clause is seen as an implicit admission that the political tide may be turning against the proposals.

And in another sign of French concern about Ireland’s blocking objections to the tax – it requires unanimity to pass – Reuters reports that unnamed French officials were briefing that France is willing to consider ways to compensate Ireland for possible lost revenue resulting from the new tax.

“We are ready to give Ireland more of the revenues. It doesn’t seem illegitimate to give something to Ireland,” one French official is reported as saying on Saturday.

But no such offer was made, Irish officials say, at the informal meeting of EU finance ministers here.

Ministers were here revisiting work done so far on commission proposals for two taxes on digital profits that the Austrian presidency hopes to see finalised and agreed by December.

Minister for Finance Paschal Donohoe has been leading the charge against the measures, arguing that the EU should only embrace a “global” approach to digital taxation and await proposals due next spring from the OECD.

He has seen increasing support for his position in recent months and received a fillip during the week when a leaked German internal paper expressed coolness about the proposed measures.

A number of member states have begun to see the proposals as a potentially dangerous escalation of trade tensions with the US, a point which Mr Donohoe has strongly emphasised to colleagues.

Following the meeting on Saturday, Mr Donohoe said he had “articulated our concerns again on the impact of the tax on tax co-operation and open trade internationally and will continue to engage with the discussions”.

Mr Le Maire told journalists the European people were demanding the taxing of the digital giants, and expressed confidence that the concerns of countries such as Germany, Luxembourg and the Netherlands were being met.

A strong majority of member states still support the proposals while, according to a commission source, Ireland, Denmark, Sweden, Finland, and Malta remain adamantly opposed.

Mr Le Maire has proposed to sweeten the pill for doubting member states by adding a “sunset clause” to the commission’s short-term, interim measure, a plan for a 3 per cent tax on the digital turnover of large firms, specifically on revenue of online targeted advertising and intermediate platform services.The French insist that the tax was always intended just as an interim measure.

Under his proposal, the new tax, expected to raise some €5 billion a year, would end once a deal is reached at OECD level on the reform of the taxation of digital companies. The Austrians have also been talking of exempting the sale of data from the scope of the tax.

Germany’s finance minister Olaf Scholz said a European tax overhaul to increase levies on large digital firms would need time to be agreed, but insisted a solution was needed. But he said the issue had become one about tax allocation – where tax is levied – and no longer just about avoidance. He expressed concern about the measure leading to double taxation.

A failure to agree, the tax’s proponents argue, will lead to proliferation of national measures. “Eleven EU member states have . . . introduced or plan to implement national taxes to cope with the challenges of the digitalised economy, all of them of a diverse nature,” an Austrian presidency document warns. “These unco-ordinated unilateral measures constitute a fragmentation of the single market and distort competition.”

The finance ministers also considered whether the EU should draw up a regulatory framework for cryptocurrencies in order to prevent tax evasion and money laundering.