Cliff Taylor: Tax heat being turned up on Government 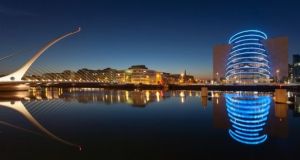 Ireland is in a tricky position as pressure grows for reform

Wednesday’s call by Jean-Claude Juncker for the end of unanimity in decision-making on tax matters at EU level is not the first time the European Commission has made the case for this. Any such change is most unlikely to happen before the end of this commission’s term next year. But the Republic will worry that this issue remains firmly on the table – and that the revelations about the tax avoidance tactics of the major multinationals have led to a push for serious change.

One way or another, we are now firmly on the defensive on the tax issue, trying to play “whack-a-mole” and kill off the various suggestions for change coming from the commission and the member states, while clinging to a less-threatening reform programme form the OECD. The key issue for the State is that many big US multinationals book their European profits here and pay significant amounts of tax here.

The argument from many of the big EU states is that the multinationals have got away with paying too little – and as part of the reform mix they are eyeing more revenues from themselves, which would reduce tax paid here. MEP Brian Hayes warned that “Juncker’s suggestion of changing this to qualified majority voting would suit big Member States but would sideline small Member States like Ireland."

The removal of the power to veto change on the issue would be hugely dangerous to the Republic, opening up the possibility of fundamental changes to the way major corporations are taxed, potentially hitting our corporate tax base and making it more difficult to attract future foreign direct investment here. Because many other small states do not want the big EU states to dominate, it looks unlikely to happen, for now anyway. But part of what is happening is to up the pressure on countries like Ireland, traditional opponents on the kind of the corporate tax reform proposals favoured by many of the bigger member states and often championed by France.

Tax is one of a few key areas where unanimity is required for a new legislative proposal to pass – it also applies in areas of foreign policy, defence and social security. This is part of the delicate balance of the EU, where there has been a traditional push and pull between areas of national sovereignty and EU influence.

The bulk of decisions of the EU Council – the prime ministers who vote on changes – are taken by what is called qualified majority voting. In practice this means a coalition of at least four member states representing 35 per cent of the EU population is required to block a proposal. Were this to be introduced on tax matters, the Republic would face a massive diplomatic challenge in trying to get together coalitions of this size to block tax reform plans.

Irish diplomacy is already working on a number of fronts. Even with the current unanimity system, the Government does not want to be seen to he holding out alone against change. Fortunately for Ireland, a proposal by the European Commission – strongly supported by France – to impose a 3 per cent levy on the turnover of digital giants, payable in the markets they sell to customers, has raised doubts in a significant number of member states. Reports suggest that these include Germany, which would fear that making such a move now would stoke transatlantic trade tensions with the Trump administration.

However the commission and France continue to push for agreement by the end of this year and the French have suggested a sunset clause – an end-date for the tax which is intended as an interim measure before longer term reforms. French sources also reportedly indicated they would not oppose the Republic getting some financial compensation. Revenue officials have estimated that the move could cost Ireland up to €160 million a year in lost taxes, a small proportion of the €8 billion annual corporate tax revenues. However Ireland will fear that such a reform would only point the way to more costly initiatives in future.

And there are other, long-term proposals on the table, including a move to a common consolidated corporate tax base across the EU, long promoted by the European Commission – but so far lacking the consensus to progress. It is a plan with huge dangers for the Republic. In the past we could always rely on the UK as an ally in such matters, and Ireland will worry about the impact of its departure. Meanwhile US tax reforms are also changing the game internationally and may make it more difficult to attract future FDI from the US.

Ireland is in a tricky position as pressure grows for reform. While the two issues have not been linked – not yet anyway – we are relying hugely on EU support in the Brexit talks. In the tax arena it will, in the next few years, be a vital battle of damage limitation. Ireland’s tack has been to move with slower and less dangerous proposals for reform from the OECD, while trying to resist the EU moves. But the heat is being turned up relentlessly some change looks inevitable, given the justifiable public anger at the tax planning antics of the multinational sector.