Property tax: There is trouble ahead but this tax needs to be saved 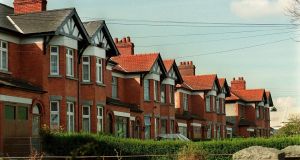 “If the Government stood back, the tax would be levied on the basis of prices which have risen by 80 per cent since the last valuation. That would mean a big increase in bills. This will not happen.”

The local property tax is in danger of a slow and lingering death. The Government is under pressure to come up with a plan for its future. But the protests which led to the dropping of water charges – which would have cost households a lot less – show just how toxic such levies can be.

And with Sinn Féin calling for the abolition of the tax – despite it being one way to tax wealth – the political stakes are high.

The original plan was to update the house price valuations on which the tax is based every three years. The rate is 0.18 per cent on prices up to €1 million – grouped in a number of bands – and 0.25 per cent on any amount over €1 million. But then minister for finance Michael Noonan decided to postpone the 2016 revaluation until November 2019. Any changes made then will form the basis of tax payments in 2020.

Doing nothing is not an option, first of all because of the current property revaluations on which the tax is based and also because many of the key exemptions are due to expire in November 2019.

If the Government stood back, the tax would be levied on the basis of prices which have risen by 80 per cent since the last valuation. That would mean a big increase in bills. This will not happen.

So why not just stick to the 2013 valuations and roll it on for another three years? This would slowly but surely undermine the tax. How, for example, do you ensure that fairness is ensured between new houses coming on to the market and those already built, if the valuations on existing properties are years old? (This assumes that the existing exemption of the tax from new houses is brought to an end.)

And if properties are not revalued next year, when will it ever happen? Slowly but surely faith would be lost in the whole system on which the tax is levied.

The failure to update the valuations for domestic rates was one of the reasons for the unpopularity of this tax, abolished in 1977 by the incoming Fianna Fáil government.

A report by a committee chaired by former senior public servant Dr Don Thornhill in 2015 also pointed to the possibility of a constitutional challenge if the tax was not updated and was demonstrably unfair. This happened in the case of agricultural rates in the early 1980s, when a group of farmers took a successful challenge.

The fact that successive governments knew that the valuations were not updated and did nothing about it was a key part of the decision.

The Thornhill report gave a range of options for the future of the tax. It appears that an interdepartmental group which has been working on the issue will recommend one of these. It is for the Government to decide on what funding it wants to raise for different local authority areas. Houses can then be revalued and the tax rate set in each area to raise the required funding.

If the overall amount to be raised is the same as it is now – about €500 million – then the average bill should be the same, even if there will inevitably be variations for some and differences from one local authority area to another.

Certainly the rate of tax will vary from one area to another, depending on price trends.The change may be flagged in the upcoming budget.

There are other decisions to be made, too. At the moment, all houses used as a primary residence purchased in 2013 are exempt, as are all new houses purchased since then. In 2017 this amounted to about 17,000 properties being exempt. As more new homes come on to the market, this number will now be rising quickly.

These exemptions, as things stand, run out in November 2019. If the tax is to have any credibility they have to end, though this will not happen without a fuss.

Other kites are being flown. The Independent Alliance has reportedly called for many pensioners to be exempted from the local property tax. In the world of Shane Ross and Co, hard-pressed younger people with big mortgages would pay, while pensioners more likely to have their mortgage paid and be financially secure would not.

Nobody should pay “a euro more” in the tax than they do now , the alliance has said, an approach which would see it generally atrophy into a annual fixed charge of decreasing relevance.

The Government is correct to try to safeguard a tax which moves some of the tax burden away from incomes. It also provides some funding for local authorities , typically a bit under 10 per cent of their revenues – and the option of allowing them to increase or decrease the bills each year looks set to continue.

This week Fingal local authority made a decision to reduce the tax by 10 per cent next year, rather than the maximum 15 per cent, thus providing an additional €2 million for local services. That’s local democracy. It is what we say we want.

There may be trouble ahead. There will be rows about what exemptions continue and about some people having to pay a bit more. There will be outrage about any suggestion that the tax might go up over the years. And there will be controversy about bills – and the tax rates – varying from one part of the country to another.

But one of the key lessons of the crash was the need to widen the tax base for the future. For this reason alone the local property tax needs to be saved.