Ireland’s national debt is shrinking but don’t splash the cash just yet, we still owe more per head than debt-ridden Greece 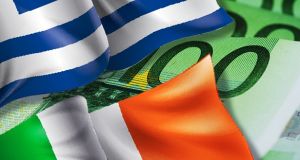 With Budget 2019 fast approaching, and calls for the Government to push the country’s balance sheet back into the black getting louder, it’s timely to consider just how robust our public finances are. And just how big our national debt is.

On the one hand, significant inroads have been made to reduce our public debt. Having peaked at € 225 billion back in about 2012-2013, it has since fallen to about €189 billion as of the end of August this year.

And when looked at as a percentage of GDP, the metrics look even better. Back in 2013 for example, the national debt accounted for about 119.5 per cent of GDP; it has since fallen substantially, standing at about 69 per cent as of the end of 2017, thanks to strong growth from our multinational sector.

So what’s the worry then, you might reasonably ask, let’s spend in Budget 2019!

Well, given Ireland’s dependence on foreign multinationals, many economists, including those at the Irish Fiscal Advisory Council, suggest that a more accurate reflection of Ireland’s debt burden is to compare it with the gross national income, or GNI*, as this excludes the impact of multinational companies’ distortions.

However, the National Treasury Management Agency (NTMA) does add a caveat with this ratio, warning that “it understates the ability of Ireland to repay debt”, because it excludes sources of tax revenue.

A clearer way then of looking at our debt, is to consider how much debt, per person, our government would have to pay back to clear the debt. And this calculation is scary enough to make anyone think twice about a “giveaway”budget.

Indeed as a recent report from the Department of Finance asserted, “public indebtedness remains high in Ireland, both by historical and international standards”.

If the Government then, is keep the public finances under a tight leash and mitigate the negative impact potential external shocks such as Brexit could have, it will need to improve not just the optics, but the metrics, of Ireland’s public debt predicament.