Decisive government action flattened the curve. It needs to continue

Now that wearing face masks is mandatory in many public spaces, the practice must be enforced 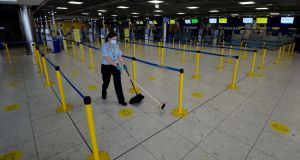 A member of the cleaning staff at Dublin Airport. The use of face masks is a remarkably efficient way of reducing contagion. Photograph: Alan Betson.

Following the outbreak of the Covid-19 virus, I noted in my last column in April most governments around the world paid close attention to the advice of medical experts and scientists. As a result, many nations soon managed to “flatten the curve”, ie to slow the rate of infections to manageable levels.

Three months on, the situation is somewhat more complicated. No country can afford to stay locked down indefinitely, due to the spiralling costs of paid furlough and the threat of long-term unemployment and deep recession.

However, as shops, restaurants and businesses gradually reopen, quite a few countries have seen a return to high infection rates. Indeed, many nations, from Australia to Israel, have been forced to impose lockdowns a second time, at least at a local level.

This pattern is seen most obviously in the United States. Due to a lack of coherent leadership, many states failed to close schools, workplaces and businesses quickly enough and then re-opened them too early. The result has been a comprehensive failure to flatten the curve and the highest rate of infection worldwide.

How can governments achieve a reasonable balance between a healthy economy and a healthy population? One answer is that the question should not be framed as “either or”. After all, a healthy economy is simply not possible in the context of a high rate of infection. Thus, any attempts to re-open society for business must be done in such a way as to keep infection rates low.

For example, it seems reasonable to me that the Irish Government continues to advise against all unnecessary international travel. Quite apart from the risk of contracting the virus abroad, it’s hard to imagine a more vulnerable space than the enclosed cabin of an airplane. On the other hand, at the time of writing, we continue to allow planes to arrive from all destinations, with little real enforcement of quarantine. Tourism from the US makes up a vital part of the Irish economy, but reports of flights arriving daily from Dallas are surely a matter of concern.

Similarly, it was a relief to see pubs and restaurants open up again in Ireland, albeit in a limited way. However, this was soon followed by worrying reports in the media of crowds outside pubs paying little attention to social distancing.

So how are we supposed to return to normal life in the presence of the virus? It seems to me that one effective weapon is not being used as widely as it should be – the face mask.

When the virus first struck, there were many references in the media to a few behavioural science studies that suggested that the wearing of masks might confer a false sense of security. It was some time before it emerged that the use of masks is in fact a remarkably efficient way of reducing contagion. This is particularly important in the case of Covid-19, as the virus can be transmitted by asymptomatic patients. In addition, there is growing evidence that the virus might also be transmitted via aerosols, ie small droplets that remain in the air (as opposed to large droplets from coughing and sneezing that travel only a few feet before dropping to the ground).

Thus, the widespread adoption of face masks should be an easy and efficient way of reducing the rate of infection. Yet many governments have left the wearing of masks as a matter of individual choice for too long. Given a mask protects the public from the wearer, rather than vice versa, this seems a mistake. At least, masks have been made mandatory on public transport in Ireland and face coverings must be worn in shops. Critically, I would like to see the practice enforced in shops and other public places.

As pointed out by Prof Orla Muldoon in an Irish Times article recently, there is a persistent tendency in the politics of today to place great emphasis on the responsibility of the individual, rather than on systemic action by the State. Yet the flattening of the Covid-19 curve was not driven by good personal choices, but by decisive government action. It seems to me that, until the virus subsides, intervention by the State should continue, in the form of the mandatory wearing of face masks in all public indoor arenas.

Dr Cormac O’Raifeartaigh lectures in physics at Waterford Institute of Technology and blogs at www.antimatter.ie