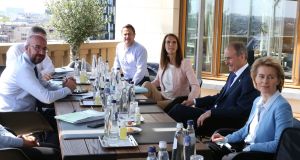 Deadlock between European Union governments delayed agreement on a plan to dig the continent out of a profound recession caused by the Coronavirus pandemic in marathon talks to bridge divisions over the size and design of the package.

The national leaders of the European Union member states haggled into the evening in Brussels on Sunday after three days of talks dedicated to hammering out a compromise on a €1.8 trillion package comprising the seven-year EU budget and a one-off recovery fund.

European Central Bank President Christine Lagarde urged that an ambitious financial aid package for the bloc was more important than reaching a quick deal at any cost.

“Ideally, the leaders’ agreement should be ambitious in terms of size and composition of the package, broadly along the lines of what has been proposed by the Commission,” Ms Lagarde said as the leaders negotiated late into the night.

“From my perspective, it’s better to agree on an ambitious facility along these lines, even if it takes a bit more time. I would hope that the leaders agree on something that’s ambitious rather than fast.”

The summit is one of the longest-running ever, demonstrating the determination of member states to keep trying to find a compromise, aware of the risk that a failure to reach a deal could spook financial markets and fuel doubts about the efficacy of the EU in times of crisis.

The EU economy is forecast to contract a historic 8.3 per cent in 2020, with some member states hit far worse than others by the downturn.

To stimulate growth and prevent widening differences between stronger and struggling EU economies, the European Commission proposed a recovery fund of €750 billion, that it would borrow from financial markets and distribute to member states.

Under the plan, the bulk of the money would be given out in grants that do not need to be paid back by national governments, but would be paid back by joint EU levies such as a plastic tax in decades to come.

But the proposal was blocked by disagreements about the size of the recovery fund and how it would be allocated to member states.

Countries including Ireland demanded a change to the system for calculating how much of the funds funds each member state should get, hoping for a greater slice of the pie.

A compromise proposal included a Brexit reserve fund of €5 billion to help countries and sectors hit by the effects of the changes to trade between Britain and the EU from January.

But the main objections came from group of wealthy “frugal” countries – Austria, Denmark, the Netherlands, and Sweden – which pushed for a more modest package, and for a reduction in the amount of grants, fearing they could incur liabilities and trigger a blowback from domestic voters opposed to monetary distribution in the EU.

The frugal states pushed for a reduction of the amount of recovery fund grants to €350 billion, down from €500 billion, and demanded rebates on their budget contributions to the EU, in a tactic some observers likened to Britain’s role in negotiations prior to its exit from the bloc.

The Netherlands also demanded a system to ensure that countries should not receive any funds if they flout democratic norms and rule of law, provoking the ire of Hungary where the right-wing nationalist government of Viktor Orbán is accused of just that.

“I don’t know what is the personal reason for the Dutch prime minister to hate me or Hungary, but he is attacking so harshly,” Mr Orbán told reporters close to the venue where leaders were meeting in Brussels.

“I don’t like blame games but the Dutchman is the real responsible man for the whole mess... The Dutch prime minister, he is the fighter.”