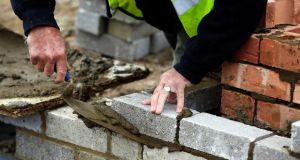 The ESRI predicts prices and rents will increase “for the foreseeable future” . Photograph: Chris Ratcliffe/Bloomberg

While house prices and rents continue to grow at elevated levels, driving many prospective buyers and renters out of the market, the Economic and Social Research Institute (ESRI) insists there is no housing bubble.

The institute devoted a significant section of its latest economic commentary to the rate of credit expansion in terms of mortgage drawdowns associated with the recent pick-up in property prices, concluding the increase did not constitute a risk to the wider economy.

“Overall, our assessment would indicate that, while new credit is growing strongly in the residential market and to construction SMEs, this increase does not appear to have occurred at the expense of good credit risk assessment,” it said.

Nonetheless, the ESRI predicted prices and rents would increase “for the foreseeable future” because of the ongoing gap between supply and demand. It suggested that long-run housing demand in the economy was now in the region of 30,000-35,000 units per annum, up from its previous estimate of 25,000.

In its report, the ESRI also noted the scale of the imbalance between supply and demand might be further complicated by the Government’s housing supply figures, which it said may “overstate” the true level of activity in construction.

This is the first time the think tank has weighed into the row over the Government’s housing statistics, which many believe exaggerate the level of homebuilding in the economy at present.

Using the historical relationship between supply and the number of planning permissions in a given year, the ESRI put the housing supply for 2016 at 12,700 units, less than the Government’s official figure of 15,000. However, many commentators believe the true level was significantly less than both figures.

In its commentary, the ESRI said the outlook for the Irish economy remained positive despite “certain countervailing forces” such as the fall-off in tax revenues.

Nonetheless, it noted the accelerated growth in employment, particularly in the construction sector, was likely to see the State’s headline rate of unemployment, which stood at 6.4 per cent in April, hit 5.4 per cent next year.

The ESRI said it considered this level of unemployment to be consistent with full employment in the economy and therefore warned the Government against further stimulus measures in the upcoming budget such as tax cuts.

On the basis of current trends, it said it expected the economy, as measured by gross domestic product, to increase by 3.8 per cent this year and 3.6 per cent in 2018.

Applegreen sees revenues fall more than a quarter 08:21
ESB swings from profit to loss due to impact of Covid-19 08:04
Gabriel Makhlouf: ‘A full second lockdown would be very serious for the economy’ 07:35
Ulster Bank could close, consumers remain cautious, and Decathlon booms 06:30
Mark Paul: Government faces dilemma on which businesses to save 06:09

1 NatWest considers closing Ulster Bank in the Republic
2 Mark Paul: Government faces dilemma on which businesses to save
3 Ulster Bank could close, consumers remain cautious, and Decathlon booms
4 Has NatWest finally run out of patience with Ulster Bank?
5 TikTok weighs plan for up to 5,000 workers in Dublin offices
6 Almost 300,000 customers visited Decathlon since June opening
7 Gabriel Makhlouf: ‘A full second lockdown would be very serious for the economy’
8 ‘I just thought it sounded exciting and different’
9 How Ireland managed to green the White House
10 Career path blocked by Covid? Time to take a new direction
Real news has value SUBSCRIBE