Martin Wolf: Federal Reserve has to walk tight line on US monetary policy 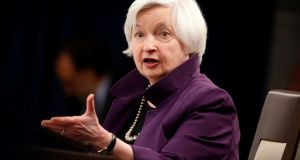 Federal Reserve chair Janet Yellen. “If Trump wishes to take a small step towards establishing a reputation for judgment he should reappoint Yellen.”

The US Federal Reserve is ahead of other important western central banks, in normalising monetary policy.

This has provoked lively debate. Prominent questions are whether the Fed is wise to proceed with its tightening and whether it should change its inflation target.

A third question is also under discussion: should US president Donald Trump replace Janet Yellen as chair when her term expires in January? The answers to all three questions are: no.

Why should the Fed not hasten to tighten monetary policy? Even after the latest move, the rate on federal funds is a mere 1.25 per cent. Moreover, unemployment has fallen to modest levels. This is even true for a broader measure, which allows for “marginally attached” and “part-time” workers.

Yet a powerful argument against tightening remains: inflation is stubbornly low. Moreover, as Yellen noted in her press conference on June 14th, inflation has been below the Fed’s objective for “roughly five years”.

It is reasonable to ask whether a central bank that is tightening while persistently failing to hit its target takes the latter seriously.

Is the 2 per cent a ceiling, not a symmetrical target? It is certainly a ceiling for the European Central Bank, which defines its objective as “below, but close to, 2 per cent over the medium term”.

One reason for holding back further fire is to prove that the Fed is as willing to let inflation exceed 2 per cent as to let it remain below it. Another reason is that the data do not show overheating. Many have fretted over an inflationary upsurge ever since the Fed acted decisively against a looming depression in late 2008. The Fed has largely ignored them. It should go on ignoring them.

In explaining his dissent from the June decision to raise rates, Neel Kashkari of the Minneapolis Fed stresses that risks are asymmetric. If the Fed tightens too soon and too strongly, the economy could be needlessly weak.

If one takes seriously the notion of hysteresis (the permanent long-run impact of recessions), these losses could be forever. If the Fed tightens too late and too weakly, inflation would overshoot temporarily. The former error would be far worse.

Moreover, when expectations are well anchored, the impact of falling unemployment on inflation may be weak. Olivier Blanchard, now at the Peterson Institute for International Economics in Washington, notes that today’s relationship resembles more that of the 1960s than that of the 1970s, with its explosive increase in inflation.

A historical example may help. Between 1960 and 1970, West German unemployment was below 1 per cent for long periods. Yet inflation showed no secular increase. It was only in the global inflation of the 1970s that inflation rose consistently.

The Fed is too enthusiastic about tightening. But should it also raise its inflation target? This is a separate issue, as Martin Sandbu has noted. If one fails to achieve one’s objective, discussing whether to raise it looks to be mainly a diversion.

This argument would be stronger if it were really hard to lower short-term, nominal rates below zero. But there is no such binding limit. People are not going to shift into cash to avoid negative rates even of several percentage points, especially if the latter are not expected to last.

Operating in cash is very inconvenient. If necessary, one could restrict the ability to convert bank deposits into cash, via a system of charges. Once this is understood, significantly negative nominal rates become feasible. The zero lower bound is as mythical as the four-minute mile turned out to be in 1954.

That would not matter if changing the target were costless. But it is not. Much effort has gone into establishing the 2 per cent target. In the recent crisis, this kept inflation expectations up and so real interest rates down.

Changing the target is sure to destabilise expectations over any future target: if they abandoned 2 per cent for 4 per cent, why might central bankers not raise it to 8 per cent? Yes, study the issue. Yes, consider how to make negative nominal rates work better. But do not change the target without much careful thought.

Finally, should Trump replace Yellen with someone else? Narayana Kocherlakota, former head of the Minneapolis Fed, provides a negative answer.

If Trump wishes to take a small step towards establishing a reputation for judgment he should reappoint Yellen. At a time of turbulence, this is no time for radical new departures. Let the Fed nurture the recovery the US and, for that matter, the president need, under Yellen’s leadership. – (Copyright The Financial Times Limited 2017)