Cantillon: Minister for Housing will have no shortage of supporters to scrap the scheme 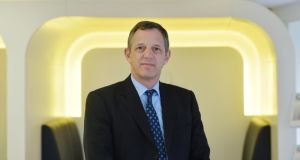 The new Minister for Housing Eoghan Murphy is certainly racking up support for his plan to review and potentially scrap the help-to-buy scheme, which was only introduced in January.

Wim Verbraeken, the chief executive of KBC Bank Ireland, told reporters on Wednesday that the solution to Ireland’s housing crisis will have to come from the supply side, rather than by ramping up demand.

Help-to-buy, targeting first-time buyers of newly built homes, served to “actually reinforce demand and it translated, we believe, very quickly, into higher house prices, rather than in an increased ability for first-time buyers to buy their homes,” Verbraeken said.

“There is no silver bullet that will solve this problem. It will come down to a combination of initiatives,” he added.

Murphy said on Sunday that he is concerned the scheme, which allows first-time buyers to apply for a rebate on taxes paid of as much as 5 per cent of the purchase price of a home, up to a limit of €20,000, has not delivered a sufficient boost in supply. The initiative came at a time when the Central Bank also relaxed lending limits for first-time buyers.

With residential property prices rising at an annual pace of 10.5 per cent as of April, there have been noises recently – from the Organisation for Economic Cooperation and Development and others – that Ireland faces another housing bubble.

However, Verbraeken has aligned with the Central Bank view that there isn’t another bubble forming, as credit remains subdued. Meanwhile, the Economic and Social Research Institute has said that while mortgage and construction lending is growing again, the increase “does not appear to have occurred at the expense of good credit risk assessment”.

While Verbraeken said that the question over whether Ireland is prone to another “boom-to-bust” is “warranted” and that while house prices have rebounded faster than expected from their post-crisis lows, they remain about a third off their 2007 peak.