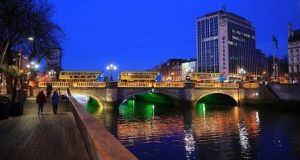 A Mercer survey found Dublin is the second most expensive city in the euro zone for employees working abroad. File photograph: Getty Images

Dublin is the second most expensive city in the euro zone behind Paris for employees working abroad, according to a survey by consultancy firm Mercer.

The study, which reviewed the comparative cost of more than 200 items across 400 cities worldwide, identified cost pressures associated with housing as a key factor in Dublin’s relatively high ranking.

The finding comes in the wake of several other reports warning about the potential loss of competitiveness from rising property prices here.

The Irish capital was only ranked 66th in global terms, however, 19 places lower than last year on account of the relative strength of the dollar against the euro, albeit this pushed all euro zone cities down the rankings.

“The strength of the dollar against the euro means that it is now more affordable for global companies to relocate their expatriates here,” said Noel O’Connor, senior consultant at Mercer.

“It is also interesting to note that once again Dublin is the second-highest ranked city in the euro zone, behind Paris.

The survey uses New York as the base city and all cities are compared against it, with currency movements measured against the US dollar.

Only three European cities remain in the top 10 list of most expensive cities for expatriates, according to Mercer.

Zurich (4) was still considered the most costly European city on the list, followed by Geneva (7) and Bern (10).

Moscow (14) and St Petersburg (36) rose 53 and 116 places from last year respectively, due to the strong appreciation of the ruble against the US dollar and the cost of goods and services.

Meanwhile, London (30), Aberdeen (146) and Birmingham (147) dropped 13, 61 and 51 spots respectively as a result of the pound weakening against the US dollar following the Brexit vote.

“While historically mobility, talent management, and rewards have been managed independently of one another, organisations are now using a more holistic approach to enhance their mobility strategies. Compensation is important to be competitive and must be determined appropriately based on the cost of living, currency, and location,” said Ilya Bonic, senior partner and president of Mercer’s career business.