Planet Business: It’s never too late to escape to Lapland 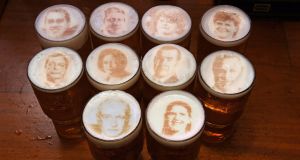 Image of the week: Foam party

This unholy pint assembly from the Two Chairmen pub in Westminster is a decent effort at a publicity stunt by long-established pub chain Greene King, but it will also double as the picture round for any table quizzes in the glorious future where nobody can quite put a name to a face. Left to right, back to front, are the following election hopefuls: Jonathan Bartley (Green Party), Boris Johnson (Love Actually Party), Arlene Foster (DUP), Nicola Sturgeon (SNP), Nigel Farage (Brexit Party), Mary Lou McDonald (Sinn Féin), Adam Price (Plaid Cymru), Richard Braine (Ukip), Jeremy Corbyn (Labour) and Jo Swinson (Liberal Democrat). They’re all party leaders at the time of writing, with the exception of Richard “Dick” Braine, who resigned in October after three months in the Ukip job but has been immortalised in beer foam nevertheless.

Market valuation of Apple, as of Wednesday afternoon. The tech giant became the world’s first trillion-dollar company in August 2018.

Value of Microsoft, as of Wednesday. Earlier this year, it became the third company in the world to see its market capitalisation exceed the $1 trillion mark after Apple and Amazon, which does not currently have trillion-dollar status.

Saudi Arabian oil giant Saudi Aramco, the world’s biggest carbon dioxide producer, became the world’s most valuable company after its stock market flotation, reaching a market cap that is twice that of Alphabet and Amazon.

Getting to know: Katri Kulmuni

Millennials may not quite rule the world just yet, but they are very much in charge in Finland, where new Social Democrat prime minister Sanna Marin (34) has a two-year advantage on her deputy, new finance minister Katri Kulmuni (32), who makes her Irish equivalent Paschal Donohoe (45) look positively ancient. Kulmuni, who has been promoted from the more junior role as minister of economic affairs, has led Finland’s Centre Party since September, when she described herself as “just an ordinary girl from Lapland” (one who speaks Finnish, Swedish, English, Russian and French). Finland is now led by five women, four of whom are in their 30s, but then it was the first country in Europe to give women voting rights (in 1906) and the first country in the world to vote women into parliament (in 1907) so they’re used to women in Finland.

It’s an inconsiderate time for leaving parties, and yet the last month of the year seems to have brought out a cluster of people who have had enough and are moving on, thank you very much.

1. Paul McDade. The Tullow Oil chief executive and his exploration director Angus McCoss quit the company after a series of production forecast downgrades, including one on Monday that saw its share price collapse 72 per cent.

4. Craig Donaldson. The boss of UK lender Metro Bank, which has been engulfed in an accounting scandal, left in another mutual decision. Donaldson suggested the bank was “sufficiently strong for me to step away”.

5. Maurice Saatchi. The advertising guru quit the board of M&C Saatchi, the company he co-founded, along with three independent directors in a dispute over how to deal with accounting irregularities.