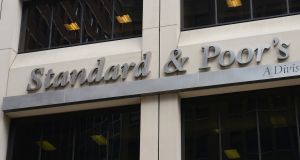 Standard & Poor’s announced late on Friday that they were upgrading Ireland’s debt rating from A plus to AA minus, a significant move which returns the rating to its pre-bailout level for the first time

The outlook for the public finances has been boosted by a decision by rating agency Standard & Poor’s to upgrade Ireland’s debt for the first time in more than four years.

The upgrade should underpin the low cost of raising debt in the markets for the National Treasury Management Agency (NTMA) and comes as a boost to the Government, following some criticism of its financial management this week by the State’s budget watchdog.

Standard & Poor’s announced late on Friday that it was upgrading Ireland’s debt rating from A plus to AA minus, a significant move which returns the rating to its pre-bailout level for the first time.

The agency said that the upgrade reflected strong budget performance and “vigorous economic growth” which has led to a fall in the level of national debt as a percentage of economic output.

The agency said that it expected that the national debt would fall to about 50 per cent of GDP by 2022 versus the current level of 60 per cent. It also pointed to measures in Budget 2020 announced by Minister for Finance Paschal Donohoe, which were introduced to build some leeway in the public finances and protect the economy from risks created by Brexit, or a possible drop in corporate tax receipts. These include the establishment of the rainy-day fund and the €1.2 billion Brexit package set aside in the budget in case the UK leaves without a deal.

The upgrade was welcomed by the NTMA, which said it brings Ireland closer to core euro zone countries like France, Belgium and Austria. Its chief executive Conor O’Kelly said: “Our new AA- rating will increase the pool of potential buyers of Irish Government bonds, which will be positive for demand and further enhance our ability to diversify our investor base.”

Mr Donohoe said: “This upgrade reflects the next stage in the journey we, in Ireland, have been on for the last decade or so. Last year we ran a budgetary surplus for the first time since 2007 and a further improvement is in the pipeline for this year. The policies being implemented by the Government are paying dividends and our objective is to create a virtuous circle in which prudent management of the public finances reduces debt service costs.”

The report gives a positive verdict on the economy, saying the recovery remains “solid” supported by an open and productive economy, a skilled and flexible workforce and healthy demographics. Growth here, measured by the Central Statistic Office’s GNI* – which factors out the impact of multinationals – averaged 4.4 per cent a year between 2014 and 2018, it said, twice the euro zone average.

A no-deal Brexit – with the UK leaving without finalising a withdrawal agreement, causing the immediate erection of trade barriers – “remains the greatest risk to the Irish economy”, the agency says. The other risk it identifies is a reversal in the sharp rise in corporation tax receipts. Should these return to 2014 levels it would lead to a revenue loss of some €6 billion, it warns, repeating warnings from the Fiscal Advisory Council. Chronic overruns in health spending remain a threat, it says.

S&P expects that growth will remain around 3 per cent a year, allowing the Government to run small budget surpluses and thus reduce the cash level of the national debt. It notes concerns about overheating and the worsening housing shortage.

Ireland can currently borrow very cheaply on international markets and so the immediate impact of the upgrading is likely to be limited. However, it does provide support for the NTMA in future as it raises new borrowings to replace maturing debt, or fund the public finances.