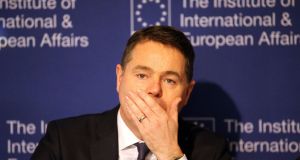 The Government may have avoided a pre-Christmas election after the Minister for Housing Eoghan Murphy survived a motion of no confidence on Tuesday. But his colleague, Paschal Donohoe, was out earlier that day drawing out battle lines for a likely vote next year.

Engulfed in recent times by headlines on runaway costs of the national children’s hospital, the National Broadband Plan and buying and fitting an industrial sized printer in Leinster House, Donohoe used a speech at the Institute of International and European Affairs to try and re-establish Fine Gael’s claim to be the party of fiscal prudence.

The Minister said he is aiming to run a budget surplus over the coming years (assuming his party is returned to power), rising by 2022 to 1 per cent of gross domestic product (GDP), or 1.7 per cent of the size of the underlying economy – measured as GNI*, or gross domestic income excluding the impact of multinationals.

The Government’s debt burden has fallen from a peak of 123 per cent of GDP six years ago to just under 60 per cent as activities of the likes of Apple, Google and Pfizer in the Republic turbocharged the effects of a domestic recovery from the crash. But borrowings remain about 100 per cent of GNI*.

As such, Donohoe’s blueprint sees debt-to-GNI* falling to 85 per cent by 2025 and to 60 per cent over time. The plan, however, is predicated on GNI* growth ticking along at 3.5 per cent to 4 per cent a year, he said. And in the event of a disorderly Brexit, all bets are off.

In reality, Donohoe is doing the bare minimum at a time when the State is facing a battery of risks, and far less than would be demanded by its lenders in the bond markets, if the European Central Bank (ECB) were not keeping the show on the road.

While the Government hasn’t had to borrow to plug a budgetary gap since it returned to a modest surplus last year for the first time since 2007, it needs global markets to refinance existing debt. Over the next five years some €44 billion of bonds will mature. Most are in the hands of overseas investors.

Risks attached to Ireland’s high debt burden would ordinarily be reflected in the market interest rates – or yields – attached to its bonds. But these have been masked in recent times by an ECB bond-buying programme.

The yield on benchmark 10-year Irish bonds would be nowhere near its current rate of about 0.05 per cent, down from 1 per cent in January and a high of 14 per cent in 2011, were it not for the ECB’s quantitative easing activities.

The new ECB president, Christine Lagarde, has inherited a governing council left divided after the era of Mario ‘whatever it takes’ Draghi. Several members opposed the ECB’s decision in September to restart the bond-buying machine. Bond markets may prove to be very skittish as Lagarde embarks, as promised, on a review of the organisation’s mandate and strategy.

Sooner or later, markets will have to consider the creditworthiness of euro zone sovereigns on their own merits.

The Republic looks particularly exposed when you look at the fact that Government debt amounted to 250 per cent of revenue last year, well above the euro-area average of 180 per cent and not far off the ratios of Italy, Portugal and Cyprus.

The prospect of a disorderly Brexit remains the main threat.

The currency and stock markets may have taken comfort in the past few months from British prime minister Boris Johnson securing a fresh Brexit deal from the EU and a growing view that his Conservative Party will win a general election next week and push the accord through parliament.

But sealing a withdrawal arrangement is one thing. Getting a free trade agreement over the line is something else.

The Government’s plan for a chaotic Brexit? To turn to the debt markets.

Meanwhile, Donohoe – long criticised by the Irish Fiscal Advisory Council (IFAC) for failing to stash away billions of euro of windfall corporate tax receipts in recent years from a handful of multinationals – warned on Tuesday of a “clear and present danger of a fall-off in corporation tax receipts”.

Figures out this week showed that Revenue received a record €3.1 billion of corporation tax in November, almost 30 per cent higher than expected, and that this line of income is set to hit an all-time high of €11 billion for 2019 as a whole.

Ireland is set to be a big loser from international efforts, led by the Organisation for Economic Co-operation and Development (OECD), to change how tax is levied globally in a digitalised economy. Meanwhile, as one the world’s most open economies, it is exposed to any further escalation in global trade disputes.

In the background, the Government has always counted on paybacks from the bailed-out banks to help chip away at its debt pile, which currently stands at north of €200 billion.

The State’s three surviving banks have only returned two-thirds of their €29 billion bailout bill – including guarantee fees, interest on bailout bonds, the payback of such debt, and sale of shares.

There’s little hope, however, of Donohoe being able to sell further bank shares in the near term as they are trading at deep discounts to the value of their assets.