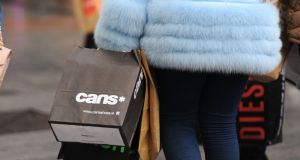 The latest KBC Bank Ireland/ESRI consumer sentiment index rose to 77.1 in November from a six-year low of 69.5 recorded in October.

“At current levels, the sentiment index is still pointing to a nervous Irish consumer but the bounce in confidence in the November survey hints that sentiment and spending could end 2019 on a positive note,” he said.

The improvement in Irish consumer sentiment was echoed elsewhere with similar indicators for the US, the UK and the euro zone lifting.

“Increased hopes for a trade deal between the US and China, the removal of the imminent threat of a disorderly Brexit, slightly healthier readings in a range of economic indicators globally and a stronger performance by equity markets likely contributed to varying degrees to ease consumers’ worries in a range of territories,” Mr Hughes said.

All five main elements of the KBC Bank consumer sentiment index posted sharp monthly gains in November. One of the key drivers was household incomes.

“November saw clear improvements in consumer thinking on their own household finances both in relation to the past 12 months and the year ahead,” he said. “While official data published through the survey period points towards rising incomes and subdued inflation, we think the main driver of the change in November was a scaling-back of Brexit worries,” Mr Hughes said.

He added that Irish consumers were facing into Christmas with the reality of strong employment and rising spending power offsetting now less immediate risks around Brexit.