Monetary policy unchanged and ECB will continue with bond-buying programme 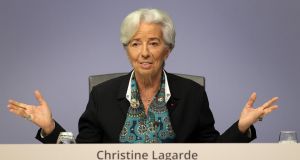 Christine Lagarde, president of the European Central Bank, faced the press for the first time in her new role. Photograph: Daniel Roland/AFP

The European Central Bank has kept its policy rates unchanged and stuck to its bond-buying programme at the first monetary policymaking meeting under its new president Christine Lagarde.

Economists had expected the ECB to leave policy unchanged while it assesses the impact of its September cut in interest rates to a record low of minus 0.5 per cent and the recent restart of its programme of bond purchases at a pace of €20 billion per month.

The ECB repeated its main message from its last two monetary policy meetings, saying that rates would not rise “until it has seen the inflation outlook robustly converge to a level sufficiently close to, but below, 2 per cent within its projection horizon, and such convergence has been consistently reflected in underlying inflation dynamics”.

Even after years of negative interest rates and more than €2.6 trillion of ECB bond purchases, European economic growth remains sluggish and inflation is well below its objective. Furthermore, doubts are growing about whether the central bank can loosen monetary policy further – or if it is running out of ammunition.

But there have been signs recently that the euro zone economy is stabilising as risks of a full-blown trade war or deeply disruptive Brexit recede. Speaking at her first press conference since replacing Mario Draghi at the start of November, Ms Lagarde indicated there was some scope for hope.

She said: “Risks remain tilted to the downside, but have become somewhat less pronounced... Incoming data point to continued muted inflation pressures and weak growth dynamics, although there are some signs of stabilisation in the growth slowdown.”

The euro zone is nowhere near the kind of stagnant economic environment which has prevailed in Japan in recent decades, she said, pointing out that “enterprise finance” was completely different in Europe where it has been growing, compared to the shrinkage in Japan.

But Ms Lagarde called on all policymakers, including national and EU governments, to introduce more “growth friendly” policies. She added: “It takes many to dance the economic ballet that delivers price stability and economic growth.”

The debut rate decision under Ms Lagarde’s presidency mirrors the unchanged policy rates announced on Wednesday by the US Federal Reserve, indicating that after loosening monetary policy in recent months in a bid to stimulate the economy, major central banks are now pausing while they assess which way global growth is heading.

Ms Lagarde used the press conference to set out her plans for a strategic review of the ECB’s approach to policy. It will examine the effectiveness of all the ECB’s monetary policy tools and would not rule out considering new ones such as buying equities as well as bonds or even distributing cash direct to households via “helicopter money”, she added.

It will also look at the ways the ECB can tackle climate change and its impact on inequality. She aims to start the review in January and complete it before the end of next year. – Copyright The Financial Times Limited 2019