Paschal Donohoe expects a surplus of €1.4 billion in cash terms 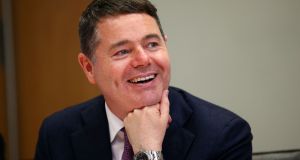 Minister for Finance Paschal Donohoe: “On foot of today’s figures, I now believe a surplus of 0.4 per cent of GDP (gross domestic product) is in prospect for this year.” Photo : Laura Hutton/The Irish Times

Minister for Finance Paschal Donohoe said on Tuesday that corporation tax receipts for November will be €700 million more than what the Government had forecast.

For the year as a whole, total taxes will come in €600 million higher than what had been projected in early October, when the 2020 Budget was unveiled.

“On foot of today’s figures, I now believe a surplus of 0.4 per cent of GDP (gross domestic product) is in prospect for this year,” Mr Donohoe said at an event hosted by the Institute of International Affairs (IIEA). “In cash terms, this represents a surplus of around €1.4 billion.”

The Minister highlighted the need to run budgetary surpluses over the medium term in order to address the vulnerabilities associated with the rising share of corporation tax receipts.

He outlined several external factors that threaten the Irish economy, including forthcoming changes to global corporate taxation policy. In order to ensure that the public finances can absorb the impact of these changes, the Minister set a number of medium-term targets which are to achieve a budgetary surplus of at least 1 per cent of GDP by 2022 and to achieve a debt-to-GNI* ratio of 85 per cent by 2025.