Renminbi and US Treasury yields slip after US president’s comments 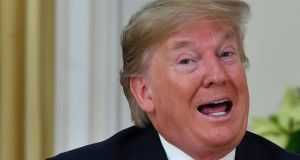 US President Donald Trump: “The China trade deal is dependent on one thing: Do I want to make it?”Photograph: AFP via Getty Images

Markets were jolted after Donald Trump suggested a trade deal with China could be delayed until after the US presidential election in November next year.

Speaking in London during a press conference with Nato secretary-general Jens Stoltenberg, Mr Trump said he had “no deadline” for getting a deal done, adding: “In some ways I think it’s better to wait until after the election.”

The offshore renminbi, the version of the Chinese currency which international investors can access outside of China, fell 0.3 per cent to 7.0630 to the dollar.

In fixed income, the yield on US 10-year Treasuries gave up ground to trade down 5 basis points on the day as investors retreated into the debt. Europe’s Stoxx 600 slipped 0.1 per cent, led by London’s FTSE 100 which fell 1 per cent. In Paris, the Cac 40 shed 0.6 per cent.

Gold, seen as a haven asset sought out by investors in times of market turbulence, rallied meanwhile, to trade up 0.5 per cent.

“The China trade deal is dependent on one thing: Do I want to make it?” said Mr Trump. “…we’re doing very well with China right now and we can do even better.”

The comments come as Mr Trump reignites global trade tensions more broadly, reimposing tariffs on some metal imports from Brazil and Argentina and threatening to impose duties on French products.

Separately, Beijing also upped the trade war ante as it retaliated against Mr Trump’s decision to sign legislation supporting protesters in Hong Kong by barring US navy ships from visiting the territory and slapping sanctions on four non-governmental organisations. Mr Trump said that signing the legislation did not increase the chances of agreeing a so-called “phase one” trade deal.

Asia-Pacific stocks closed down in earlier trading. Hong Kong’s Hang Seng ended the session down 0.2 per cent having slid as much as 1.4 per cent earlier. The CSI 300 of Shanghai- and Shenzhen-listed stocks finished up 0.4 per cent after recovering from an early fall. Tokyo’s Topix lost 0.5 per cent. – Copyright The Financial Times Limited 2019