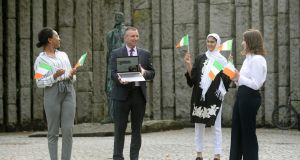 A team of Dublin City University (DCU) students will participate next week in a competition for social entrepreneurs in which 32 countries are involved.

The Enactus World Cup, an event which will see national teams compete to be named Enactus world champions, is run by the global non-profit group Enactus. It supports students, academics and business leaders to create and implement social entrepreneurial projects.

The DCU team in the competition will present two projects: Dyslex.ie, software which helps those with dyslexia to increase their reading speed, and Vocalise, a programme which aims to build the confidence of students and improve their public speaking and communication skills.

In the opening round of the competition, the DCU students will compete against South Africa, the Netherlands and Eswatini. Next Wednesday they’ll find out if they progress to the semi-final, while a winner will be announced on Friday September 11th.

“I would like to wish Enactus DCU and team Ireland the very best of luck next week. They have worked so hard under such difficult circumstances that I feel they really deserve to be recognised,” said Enactus Ireland country lead Fiona O’Byrne.

1 Cosgrave Property Group secures exit from Nama
2 Revenue publishes list of companies tapping State for wage support
3 Bake-off soy sauce tweet backfires for UK trade ministry
4 107 jobs at risk as Broderick’s shareholder considers examinership
5 Grocery shopping app Buymie delivering for Devan Hughes
6 Developers may need to go back to the drawing board as one-beds fall from favour
7 Johnny Ronan loses out on €315m Dublin docklands deal
8 How long can Government afford to keep State pension age at 66?
9 Halfords sees 700% increase in sales of e-scooters
10 Covid-19 will have a significantly worse impact on UK public finances than on ours
Real news has value SUBSCRIBE