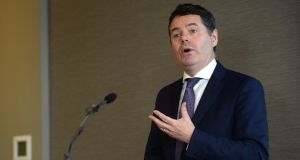 The public finances fell further into the red last month as Government spending on wage supports linked to the pandemic soared.

The latest exchequer returns show the Government’s budget deficit – the difference between what it spends and what it takes in in taxes – rose to €9.4 billion in August.

This compares wit a deficit of just €625 million this time last year, marking a year-on-year deterioration of €8.8 billion.

The headline deficit was driven by an increase in Government spending, which was €43.2 billion for the period, up 28 per cent, or €9.5 billion, on last year.

“The rise in expenditure primarily reflects increased departmental drawdown in response to the Covid-19 pandemic,” said the Department of Finance, pointing particularly to health and social protection.

Social protection spending alone was €13 billion, which was 81 per cent or €5.9 billion above profile, primarily as a result of the Government’s wage support schemes for affected workers.

The State’s year-end deficit is expected to be in the region of €30 billion.

Overall, the figures show the Government took in €34.2 billion in taxes for the eight-month period, down €802 million, or 2.3 per cent, on last year.

Income tax, the Government’s biggest tax head, has proved remarkably resilient in the face of the Covid-19 crisis, generating €13.9 billion, which was only marginally (1.4 per cent) down on last year and above the department’s revised profile.

This is because many of the workers who have lost their jobs as a result of the pandemic were in low-paying sectors such as retail and hospitality and paid less income tax in the first place.

Corporation tax receipts came to €6.5 billion for the period, which was €1.5 billion, or 31 per cent, better than expected. Business tax receipts hit a record €10.9 billion last year and are on course to eclipse that total this year.

A pick-up in excise duty receipts in August, meanwhile, was linked to increased spending on tobacco as cross-Border shopping fell.

Commenting on the figures, Minister for Finance Paschal Donohoe said: “Today’s exchequer returns confirm the scale of the cost of fighting this pandemic.”

“The exchequer deficit to end-August reflects the unprecedented increase in public expenditure as a result of the Government’s support for our health service and the wider economy through this crisis.”

“Although there are some positive developments – most notably in income tax receipts – a considerable and unprecedented amount of uncertainty remains,” he said.

“A deficit of this magnitude underlines the extent of the challenge we face – once the economy recovers – in placing the public finances on a sustainable trajectory,” Mr Donohoe said.

“There is also some evidence that consumer spending is starting to return to some level of normality,” he said, noting that the rate of decrease in VAT receipts has slowed considerably since the outset of the pandemic, from a 50 per cent drop in March to 30 per cent in July.

“While a 30 per cent drop is significant, it has to be remembered that many businesses have opted to defer payment of the VAT to Revenue, so the figures should reflect a smaller drop in actual spending.”

“Clearly, however, any reduction in Government supports over the coming months will impact on disposable incomes and have a resultant negative impact on spending and VAT receipts, unless there is a quicker-than-expected return to pre-Covid employment levels,” Mr Vale said.