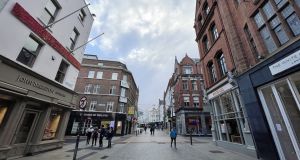 The State’s main cash support for small businesses impacted by Covid-19 has had a lower-than-expected take-up and is costing the Government significantly less than originally set aside for the scheme.

The Covid Restrictions Support Scheme (CRSS) provides grants of up to €5,000 a week to businesses that have been forced to close or operate at a significantly curtailed level due to the restrictions.

It was expected to cost up to €80 million a week under Level 5 restrictions. The Department of Finance confirmed it is currently costing significantly less than that.

However, it declined to give an estimate of the weekly cost because of the staggered nature of certain claims.

So far, 17,100 businesses have registered for the CRSS, covering 19,700 premises with €172.2 million paid out under the scheme, which has been in operation since November.

To qualify, companies have to prove their turnover is down by 75 per cent or more as a result of the restrictions.

However, it is understood that some businesses are failing to meet the criteria because of the limited trade they are conducting online.

“It may well be that businesses are not operating at less than 25 per cent of turnover and therefore are not eligible for this targeted scheme,” a Department of Finance spokesman said.

“This is a positive aspect in relation to the Irish economy and resourcefulness and ingenuity of businesses in maintaining some level of turnover in the face of restrictions on access of customers to premises,” he said.

“Businesses have pivoted to online provision of goods and services and been assisted in this by the trading online voucher schemes,” he said, while noting that the CRSS was just one of several financial supports being provided, including the Employee Wage Subsidy Scheme, a rates waiver, lower VAT rates and low-cost loans.

The scheme, announced in the budget, was aimed at hard-hit restaurateurs and publicans in the hospitality sector as well as small independent retailers and businesses. Business groups, however, have complained that the relief is not enough to cover fixed costs in many cases and that the scheme does not cover outdoor activity businesses.

A breakdown of the scheme to date shows that personal service businesses such as hairdressers and beauticians account for 22.2 per cent of the premises currently availing of the support.

Wet bars, those that do not serve food, account for 17.7 per cent while cafes and restaurants account for 12.4 per cent.

Specialist retail stores, including toy shops, florists and clothes stores, account for 12.2 per cent while hotel and other accommodation businesses such as B&Bs account for 9.3 per cent. Bars that serve food accounted for a further 9.1 per cent.

The department had expected the CRSS to cost up to €80 million a week during Level 5 restrictions.

This was based on all businesses within certain sectors qualifying for the scheme, “some businesses have continued to trade successfully during Level 5”, the department’s spokesman said.