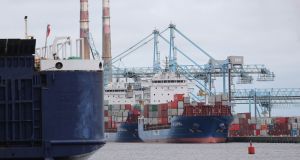 The export sector has held up despite Covid-19.

Every quarter, when the Central Statistics Office publishes the latest national accounts figures, it is like getting a new Sudoku puzzle: it is left to the readers to complete the puzzle to arrive at a true picture of the economy. However, as with Sudoku puzzles, filling in the gaps to get the answer can be challenging.

The publication earlier this week of the accounts for the second quarter of 2020 was no exception.

The headline result was that the fall in gross domestic product in the second quarter of this year was only 6.1 per cent compared to the first quarter, the second-lowest fall in the EU. However, as made clear by the CSO at the press conference, the reality on the ground was much more difficult.

Output in the distribution, transport and hospitality sector fell 30 per cent compared to quarter one and output fell by two-thirds in the arts and entertainment sector. In turn this reflected the fall in personal consumption of 20 per cent. When we were locked down, we could not spend.

These figures for the fall in output in individual sectors fit with the figures for employment and unemployment published by the CSO last month, which showed a fall in hours worked in the second quarter of 22 per cent. This suggested that the underlying unemployment rate was probably close to 25 per cent for the quarter.

Of course, since the lockdown was eased, activity has picked up and many people have returned to work, especially in construction and retailing. A key factor in the relatively small fall in GDP was the fact that, as measured in the national accounts, output in manufacturing actually rose by 2 per cent.

This time round, solving the conundrum posed by the national accounts is aided by the availability of a series of “hints” from the tax revenue figures: corporation tax revenue is currently €1.5 billion ahead of last year in spite of the crisis affecting many companies; and income tax revenue, which the Department of Finance had expected to be down €2 billion compared to last year, was almost unchanged.

The exceptional outcome on corporation tax reflects the major relocation to Ireland by US multinationals of their intellectual property, partly driven by changes in the US tax regime.

Given the corporation tax rate, an increase in tax revenue of €1.5 billion implies an increase in profits of around 10 times that amount, around 5 per cent of annual GDP.

Most of this “output” is credited to the manufacturing sector, as much of the intellectual property is used to produce electronic goods in Asia. This has contributed to the robust performance of manufacturing. Of course, all the after-tax profits leave Ireland, but Ireland benefits to the tune of the €1.5 billion in tax, about 0.7 per cent of national income: a welcome boost in difficult times.

The exceptional income tax figures reflect first that much of the export sector, where pay is well above average, was little affected by the crisis. The figures for exports and output in the IT and pharmaceuticals sector bear this out.

Employment was also maintained in the public sector, with its many professionals. Second, the income tax code is very progressive, with most of the tax being paid by those on above-average incomes. So income tax receipts held up.

The result of these special factors is that government borrowing for the year is likely to be significantly lower than the €30 billion originally anticipated. This will lessen the burden of debt for the future.

However, much more important is the fact that the tradeable sector of the economy is largely unaffected by the current crisis, and its resilience, albeit facing Brexit, will help support the economic recovery.

The figures for the balance of payments published at the same time as the national accounts, are also, like GDP, distorted by multinational activity. However, it is clear that exports have continued to flourish: in the second quarter, exports of goods were at an all-time high. Meanwhile, with the collapse in consumption, imports fell dramatically.

What this means is that the rise in savings by companies and households will not only finance the Government’s borrowing, but some of it will go to finance borrowing in the rest of the EU. This is a very different picture than a decade ago.

1 Johnny Ronan loses out on €315m Dublin docklands deal
2 Pre-flight Covid tests possible ‘within days’ if given go-ahead – airports
3 Meath site primed for delivery of enterprise and employment
4 Ryanair and Aer Lingus to cut further flights from regional airports
5 How long can Government afford to keep State pension age at 66?
6 Bank of Ireland takes €169m charge for 1,700 job cuts
7 Liquidators appointed to Irish arm of Wirecard
8 Tesco takes to the skies with home delivery by drone
9 Sanofi, GSK to supply vaccine doses to WHO-backed alliance
10 How much state pension will I get next year?
Real news has value SUBSCRIBE