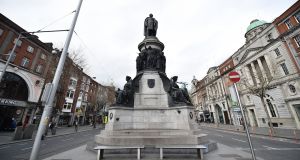 An empty O’Connell Street in Dublin. The March survey found that nine in 10 consumers envisage some impact from the Covid-19 crisis on the Irish economy. Photograph: Charles McQuillan/Getty Images

Consumer confidence in the Republic has taken a nosedive on foot of the coronavirus outbreak. KBC Bank’s latest index, which gauges consumer sentiment, recorded an eight-point drop to 77.3 in March, one of the largest on record.

“Irish consumer sentiment weakened significantly in early March as nervousness about the impact of the coronavirus on health as well as on economic and financial prospects increased materially,” the bank said.

The drop between February and March is not as large as those seen on a couple of occasions last year when Brexit-related concerns hit the confidence of consumers here.

However, KBC said the latest survey was completed in the early part of March, and therefore did not incorporate the impact of the Government’s decision to close schools and colleges or the step-up in global concerns about the virus.

The bank said it was predicting “ a further marked increase in coronavirus-related concerns” next month.

“Our sense is that developments since the survey was compiled would threaten a materially larger adjustment,” said KBC Bank Ireland’s chief economist Austin Hughes.

“The blow to consumer confidence on top of the emerging hit to incomes underscores the importance of a substantive and speedy policy response to the economic and financial fallout.”

“On the basis of a very crude statistical relationship between the two variables, the drop in consumer sentiment in March, if sustained, would point to about three-quarters of a percentage point being shaved off the growth in Irish consumer spending in 2020,” Mr Hughes said, while noting the hit to consumer trends was likely to bigger in next month’s survey.

The March survey found that about nine in 10 consumers envisage some impact from the Covid-19 crisis on the Irish economy, including roughly one in four who expect “ a substantial impact”.

Again this figure is expected to be much larger next month, with nearly all forecasting institutions predicting a significant hit to the Republic’s economy.

“There is little debate that the immediate and primary focus of the policy response should be on health rather than economic and financial consequences of the coronavirus outbreak,” Mr Hughes said.

“However, the March sentiment survey results suggest the importance of measures to offset both the general adverse effect of increased concern on the part of Irish consumers and, more importantly, address the likelihood of significant hits to the incomes of substantial numbers of households.”