Cost of capital projects often rockets due to lofty notions 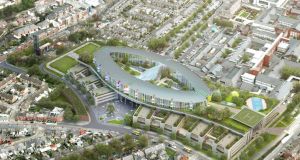 “The true cost of achieving an optimal design for the children’s hospital is that it has hoovered up the budgets needed for other health facilities that will, as a result, be delayed for years.”

In all developed countries, major capital projects have a strong tendency to overrun their initial budgets. The new underground line in London, Crossrail, has seen a dramatic escalation in costs, and the delay in completing the work has put back its opening by at least a year.

However, just because this happens to others’ capital projects does not explain or excuse the huge anticipated overrun on our proposed national children’s hospital.

It is essential to understand what lies behind this massive cost escalation and, in particular, to learn how we might succeed in controlling costs on future projects.

It is not inevitable that large capital projects will overrun their budgets – the Luas extension in Dublin actually performed well on this criterion.

In building a new hospital, there is a temptation to plan for a “state-of-the-art” solution, without considering the costs and benefits of all of the innovative design features. It is so often the case that the best is the enemy of the good. The best technical solution is not necessarily the most cost-effective.

The true cost of achieving an optimal design, at great expense, for the children’s hospital is that it has hoovered up the budgets needed for other health facilities that will, as a result, be delayed for years. The net outcome is likely to be poorer health results for the State as a whole than if a slightly less ambitious approach had been taken to the design of the hospital.

Another common problem with containing costs on large-scale capital projects is changes in design after the beginning of the project. Very often these changes occur without their costs and benefits being fully tested.

Design creep, with related costs, was evident both in the case of the port tunnel and the original proposal to build a metro to the airport. In the case of the port tunnel, residents near the original planned exit in Whitehall complained and, as a result, the tunnel was extended. The cost of the additional tunnelling would have allowed the State to buy the houses of those immediately affected at a premium, and still have a lot left over. Thus this addition to the project was probably not justifiable on economic grounds.

While the port tunnel eventually went ahead, the design changes and related cost escalation on the metro planned a decade ago may have contributed to its cancellation. In the case of this 2000s plan for a metro, the underground portion of the line was also significantly extended at planning stage, without testing the costs and benefits of the change. In the event, the project was cancelled in 2011.

There is now a real danger of design creep in the current updated proposed metro to the airport. To deal with concerns of Ranelagh residents around their suburb being bisected, it is possible that the tunnel part of the project may be substantially extended. Before any such decision is made, the benefits of any change would need to be weighed against the costs that the change might bring.

A factor that is often overlooked in big public transport projects is the disruption to society during the construction phase. This was not factored into the cost-benefit analysis of the proposed metro: it is essential to add this into the evaluation of different options before reaching any decisions.

One of the metro options under consideration would involve closing the Luas for at least a year. An alternative, which would cost €100 million more, would close it for three months. In deciding which option to take, the huge disruption cost for tens of thousands of commuters over a lengthy temporary closure must be considered against the additional costs of delivering a shorter closure period.

Following Hurricane Sandy, the original plans for repair works to New York’s L subway would have closed this line, which serves 275,000 people a day, for 18 months. That would have created chaos in the city.

A team of engineers from Columbia University has now come up with a functional, if less technically elegant solution, which can be implemented without the need for any daytime closures. Much to the relief of New York commuters, this is what has now been agreed.

Public funds for infrastructure are scarce. In planning major projects in the future we need to take adequate time to test proposals. The costs and benefits, including disruption costs, must be fully factored in before making any final decisions.