US seeks ‘verification’ and ‘enforcement’ in any Chinese trade deal 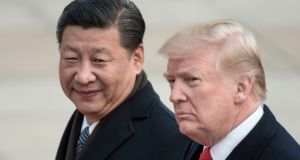 The Trump administration has vowed to come up with ways to ensure that China complies with trade commitments it makes to the United States, after three days of negotiations concluded in Beijing.

The administration said it would decide on next steps for the high-stakes negotiations after officials reported back to Washington on the outcome of the meeting. But in a statement the office of US trade representative Robert Lighthizer said on Wednesday it wanted any deal to include “ongoing verification and effective enforcement”.

Nonetheless, the US noted progress during the talks, including commitments by China to purchase additional US products and services including agricultural, energy and manufacturing goods. Progress on less concrete issues such as changing the Chinese policy of forcing foreign companies to hand over knowledge and intellectual property, was slower, but was discussed during the meetings.

Verifying that China meets its commitments is emerging as a key concern for officials in Washington. The United States may also have been unsettled by the surprise visit of North Korean dictator Kim Jong-un to Beijing on Tuesday at the invitation of Chinese leader Xi Jinping. The visit – which took place just blocks from where the US-China trade negotiations were taking place – underlined the leverage China may have in the talks in terms of the wider geopolitical context. Donald Trump is seeking to progress a peace deal with North Korea, with China playing a key background role.

This week’s negotiations between US and Chinese officials, which stretched into a third day, were seen as vital for laying the groundwork for more substantive talks in the coming weeks in Washington. Mr Trump may also meet senior Chinese figures at the World Economic Forum in Davos later in January. China and the US have been locked in a trade war since last year, though both sides agreed to a 90-day truce on December 1st following a meeting between Mr Trump and Mr Xi on the fringes of the G20 summit in Buenos Aires.

Meanwhile, the EU has proposed a blueprint to start negotiations on a new trade deal with the US which would remove tariffs on industrial goods and urge closer regulatory co-operation in sectors such as pharmaceuticals and medical devices. Brussels said it was drawing-up plans to put to member states, with a view to starting trade negotiations with the United States. The union is seeking to avoid punishing car tariffs which have been threatened by the Trump administration.

Relations between Washington and Brussels continued to be strained. It emerged this week the Trump administration downgraded the diplomatic status of the EU last year without informing the bloc. The EU’s delegation in Washington – led by Irishman David O’ Sullivan – had enjoyed the same status as a national embassy. But the state department last year classified the embassy as an international organisation, alongside the African Union.