Cantillon: Donohoe set to be assailed by fund demand alongside construction kickstart 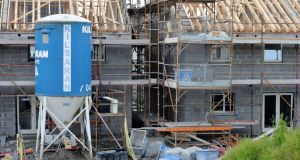 With the prospect looming of the first tentative steps towards a restarting of the economy, business is beginning to focus on the practicalities of opening its doors.

For many in the private and the public sectors, top of the list appears to be turning once again to the Government for a handout.

Ibec, the voice of Irish business, is calling for a €15 billion package of measures to reboot the economy, including an extension of the temporary wage subsidy, a payment that publicans and others in the hospitality sector also say is critical to their survival. And, in the public sector, CIÉ has signalled that it is facing an imminent cash crunch while the Health Service Executive is warning about longer-term impact on its permanently overstretched budget.

Minister for Finance Paschal Donohoe will have the unenviable task of deciding who gets what, if anything – at least until a new government is formed. Even with the National Treasury Management Agency adding about €15 billion to its borrowing this year, there will not be nearly enough to satisfy all the calls for cash.

One group has got a headstart. Home Building Finance Ireland (HBFI), which is financed by the State to lend to builders on commercial terms, announced over the weekend not one but two initiatives – €200 million in “Step In Funding” and a “Momentum Fund” – to support the sector’s recovery.

The first targets builders who may not be able to top bank finance. The second is designed specifically for large developments in prime locations that were previously funded by the banks.

The agency is more than doubling the maximum amount it can lend to an individual project to €75 million (from €35 million), including, for the first time, major apartment schemes.

At the other extreme, small builders previously locked out of the HBFI because their developments had fewer than 10 homes can now apply for loans of €1 million upwards.

Donohoe said the new measures would kickstart housebuilding after the crisis and “bring new developments to completion as soon as possible”.

There will be a long queue at the Minister’s door hoping for similar decisive action.